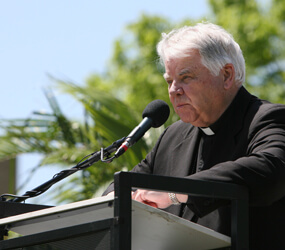 NOTRE DAME, Ind. – Bishop John M. D’Arcy of Fort Wayne-South Bend May 16 made it clear that even though he would not attend the university’s commencement ceremony the next day, he was not giving up on Notre Dame.

“It remains a privilege to be associated here with you,” he told graduating seniors during the 25th baccalaureate Mass celebrated at the University of Notre Dame’s Joyce Center.

Bishop D’Arcy was encouraged by the actions of a coalition of pro-life students known as Notre Dame Response in the weeks following the University of Notre Dame’s invitation to President Barack Obama to be the commencement speaker and to receive an honorary degree.

“I see these classes, one after another, year after year, coming here. They put it all together. It’s very beautiful … this Mass, and your worship and your prayer,” the bishop said.

Shortly after the White House and Notre Dame announced Obama would address graduates May 17 and receive an honorary doctor of laws degree, Bishop D’Arcy announced he would not attend the commencement.

Bishop D’Arcy, whose diocese includes Notre dame, and many other U.S. bishops and cardinals, objected to the choice of Obama because he supports legal abortion and embryonic stem-cell research.

They pointed to the 2004 U.S. Conference of Catholic Bishops’ document on “Catholics in Political Life,” which states: “The Catholic community and Catholic institutions should not honor those who act in defiance of our fundamental and moral principles. They should not be given awards, honors or platforms which would suggest support for their actions.”

While Holy Cross Father John I. Jenkins, Notre Dame’s president, said he believes he was not violating the spirit of the U.S. bishops’ document because Obama is not Catholic, he did stress to the graduates during his homily at the baccalaureate Mass that all are called to serve others in love.

Father Jenkins spoke of three Notre Dame alums he said model such love. One was a poet, another a physician. The third, a 1959 graduate, was political columnist Mark Shields, who recently addressed the problems Notre Dame faced over the Obama invitation.

“As a proud graduate of Notre Dame and, frankly, as an admirer of (Father) Jenkins, I am not an uninterested bystander in this controversy,” Shields wrote in a March 29 column. “My university likes to think of itself, not immodestly, as the place where the Catholic Church does its thinking.”

Shields defended Obama as a “major political leader,” not a “champion of legalized abortion.” He argued that while Obama is decidedly “pro-choice,” other issues such as the economy, health care and the Iraq War are more important to Obama.

“When I listen to him,” Father Jenkins said of Shields, “he always brings to his analysis a deep sense of the moral struggles that are at the heart of the political debate. And the moral responsibilities of political leadership and citizenship. In that way, his commentaries, I think, model a real sense of service in leadership, and service to us.”

In comments made later that evening, following a rosary he led at the grotto as part of an all-night pro-life prayer vigil, Bishop D’Arcy reiterated church teaching, referencing Pope John Paul II’s 1995 encyclical, “Evangelium Vitae” (“The Gospel of Life”).

“All the other rights, which are so threatened … the right to work, the right to a home, the right to health care, are rights that must be defended,” Bishop D’Arcy said. “But they’re meaningless if you don’t have life.”

Bishop D’Arcy said he was saddened by the division that has occurred as a result of Father Jenkins’ decision to honor Obama during the commencement, but said he also was uplifted by the efforts of Notre Dame’s pro-life students.

Following the rosary, Bishop D’Arcy joined students who packed Alumni Hall Chapel for eucharistic adoration at about 10 p.m. Students and others prayed in front of the Eucharist through the night, until Benediction at 10 a.m. May 17.

Bishop D’Arcy stayed for nearly an hour and was greeted with shouts of support as he left the chapel. One person cried, “We love you, Bishop D’Arcy. Thank you!”

As Bishop D’Arcy made his way back across the campus late that evening, he reflected on what has been happening at Notre Dame, saying he expected God to draw something good out of it all.

“So I think there’s great hope and those of us who are older have to be inspired by them, but also inspire them in their leadership,” he said. “There’s always hope, but there’s always going to be a struggle … a struggle for Christ.”