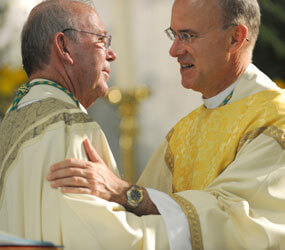 HARRISBURG, Pa. – When Bishop Joseph P. McFadden entered St. Patrick Cathedral Aug. 18, he also entered the hearts of the people of the Diocese of Harrisburg, and asked for their prayers.

“I ask you to pray for me that I may be a good shepherd after the heart of Jesus. Pray that together we may be good builders of the kingdom of God here in Harrisburg,” the bishop said in his homily during the Mass to install him as the diocese’s 10th bishop.

“Pray that we will have the courage to invite others to embrace our faith in Jesus. Pray that I may be able to encourage those who have grown lax in their faith to rediscover the great gift that God has given to us in his son, Jesus, and the great treasure that he has left us in the Eucharist,” he said.

The installation Mass began with a 20-minute procession that included a Knights of Columbus honor guard, seminarians, lectors, ecumenical representatives and clergy, including priests from the Harrisburg Diocese and the Philadelphia Archdiocese, where Bishop McFadden had been an auxiliary bishop for the past six years.

Numerous bishops also were in the procession. Among them were Bishop Kevin C. Rhoades, Harrisburg’s ninth bishop and now head of the Diocese of Fort Wayne-South Bend, Ind; Archbishop Pietro Sambi, apostolic nuncio to the United States; Cardinal Justin Rigali of Philadelphia; Cardinal John P. Foley, grand master of the Equestrian Order of the Holy Sepulcher of Jerusalem; and Cardinal William H. Keeler, retired archbishop of Baltimore and former bishop of Harrisburg.

As the procession made its way to the altar, Bishop McFadden knocked at the cathedral doors. He was welcomed inside by Father Thomas Rozman, pastor of the cathedral parish.

Cardinal Rigali then presented Bishop McFadden to Father Chester Snyder, who was diocesan administrator for the past seven months, and Father Kenneth Lawrence, senior member of the college of consultors.

As Bishop McFadden processed to the altar, the congregation shifted to catch a glimpse of him, with his crosier and miter, as he moved through the capacity crowd.

Once he officially took his place as head of the diocese and sat in the cathedra, or bishop’s chair, he was welcomed by a line of various representatives of the community – including clergy, ecumenical and civic leaders, religious sisters, Knights of Columbus, students and persons with disabilities.

Later in the Mass, men and women representing the various cultures of the diocese also greeted the bishop when they brought up the offertory gifts.

In his homily, Bishop McFadden spoke at length about the Eucharist as the center of the Catholic faith. He also talked about the call to live the Gospel and hope for the church.

He said one of the challenges in the church today that he must confront as bishop “is the diminished appreciation of Catholics for the importance of the Sunday Eucharist in their lives.”

Bishop McFadden remarked that God desires to live in his people so that they can help build his kingdom.

“This is really the task and work of the church in Harrisburg,” he said. “God calls us to be his people here in this place at this time and this moment in history.”

The bishop called upon the faithful to promote respect for human life, proclaim the truth of the sanctity of marriage, and recapture an appreciation for the sacrament of reconciliation.

He also addressed and apologized to victims of clergy sexual abuse.

“I assure you, the victims, that you have my deepest love and concern and I will do all in my power to see that no such tragedy occurs again in the church,” he said.

Before addressing the Spanish-speaking members of the diocese in their language, Bishop McFadden spoke of Mary as a model for the faithful.

“She teaches us that we must always be a people of hope and always trust that our loving God will sustain and accomplish his work in us if we will only remain faithful to him and to his promises,” the bishop said. “It is my prayer that we the people of the church in Harrisburg will always be a people full of hope.”

Cardinal Rigali told The Catholic Witness, Harrisburg’s diocesan newspaper, that Bishop McFadden has “a great deal of love for people. … He’ll be of complete service to the diocese and to individuals.”