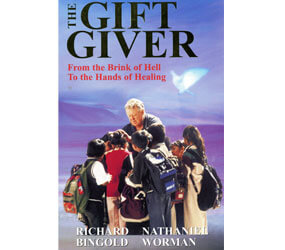 Richard Bingold has been to hell and back. Now, he’s walking a path to heaven and hoping to take many other people along for the journey.

Bingold, an internationally recognized speaker and author who is known for his healing ministry that is said to be through the Blessed Virgin Mary’s intervention, will hold two presentations and healing sessions at St. Benedict’s parish in Baltimore Oct. 2 and Oct. 5.

“Even the doubters should come, even if they’re searching,” Bingold said. “What they’re going to hear is the truth.”

The 76-year-old faith-filled Catholic took a long and winding path to the truth. Born in the Hell’s Kitchen neighborhood of New York and raised in The Bronx, Bingold had a gentle father and a disciplinarian for a mother.

Early on in his life, Bingold developed an alcohol addiction. Eventually, he pursued a career as a private investigator. He investigated the mob and drug dealers, but was dealing with his own demons as well.

“I was out drinking, carousing and screwing around,” Bingold admits. “It cost me my marriage and my business. My wife threw me out. She had every right to throw me out. For three years after, I drank myself into oblivion.”

Bingold, who has five children with his first wife, mourned the end of his marriage. His second marriage to his current wife, Monique, stabilized him. They eventually moved to and settled in Vermont, where he also currently resides.

Two transformational events changed Bingold’s perspective. During a 1978 investigativejob, he was injured in a high-speed boating accident and sustained serious internal and external injuries.

“When they examined me on the docks, they pronounced me dead because I had no vital signs,” Bingold said of his miraculous survival.

Later, while driving in Vermont, Bingold drove his car into a valley. He survived and when he woke up in the morning, Bingold prayed to the Blessed Virgin Mary, pledging to put his life in order, stop drinking and to dedicate his life to ministry. He enrolled in Alcoholics Anonymous and has been sober for more than 20 years.

Bingold, an altar server as a young man, re-discovered his faith and went deeper into a connection with the Blessed Virgin that he never could have imagined.

He devoted his life to the church and began to visit sites like Medjugorje, where apparitions of the Blessed Virgin have been reported to have happened. Bingold fashioned a stone rosary from the hills there and it has become a “pilgrim rosary.” He travels the world with the rosary and has prayed over more than 100,000 people seeking the intercession of Mary for healing. He travels alone with no help, and says he does so with the vocal support of several U.S. bishops.

“I always ask for their baptismal name, ask if they love Jesus and we pray for what their soul wants,” Bingold said.

Bingold hopes people will give their lives to God, just as he did. He feels the healing power of the divine each day and wants to do his part in extending it.
“I share my life without hesitation,” he said. “I’ve been blessed with this ministry.”