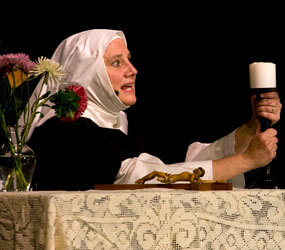 Dominican Sister Nancy Murray had to bring her “A game” if she wanted to tell a story at the dinner table as a child. As the third of nine children, she had to compete for the attention of her lumber salesman father, Edward, who encouraged music and humor to flourish in the Chicago home. He loved a good story.

“Our dinner table was the first stage,” Sister Nancy said recently during a phone call. “There was lots of comedy and competition. It was all about who could get daddy to laugh.”

It didn’t help that brothers, Bill and Brian, were among those jockeying for the spotlight. Yes, it was that Bill Murray, from “Saturday Night Live,” “Ghostbusters,”” Caddyshack” and “Groundhog Day” fame. Brother Brian is better known as Brian-Doyle Murray and he co-wrote “Caddyshack,” was also on SNL and has appeared in Wayne’s World and many other films. Many of her siblings have succeeded in Hollywood.

Laughing, Sister Nancy says her brothers refer to her as: “My sister the Sister, Nancy the nun.”

It is curiosity that often brings people to Sister Nancy’s one-woman show about the life of St. Catherine of Siena, which will have two performances Nov. 12 at Notre Dame of Maryland University’s LeClerc Hall. The performances will benefit the mission and ministries of the School Sisters of Notre Dame of the Atlantic-Midwest province.

“I want to say in some ways Billy has given large amounts of money, in kind, by people using his name to get to me,” Sister Nancy said. “There are people who have done similar work that have not been nearly as successful.”

“They never think of a saint with a sense of humor or that she argued with her mother,” Sister Nancy said. “I just want everybody to believe that each person can make a difference.”

Sister Nancy inherited performing the St. Catherine show from a mentor, Dominican Sister Kathy Harkins, who died in 2000. Sister Nancy has performed the story in both English and Spanish across the country.

“It shows you how she grew through prayer,” Sister Nancy said.

She recently had arthoscopic surgery on one of her knees and her brothers tease her that it’s because “all that liturgical dancing.”

Before Bill and Brian got the acting and comedic bug, Sister Nancy was performing on community stages.

“I was the first one in my family to do theater,” she said.

She later majored in drama at Barry University and received her master’s degree in pastoral studies from the Loyola University of Chicago.

Sister Nancy said that as a young woman, she was attracted to the notion of service. That spark never left.

“I know for me if I don’t continue to choose to be with poor people, I’d lose it because they make you most authentic,” Sister Nancy said.

While many people come to know of her one-woman shows, Sister Nancy has spent much of her ministry working with youths, soup kitchens, shelters, retreats and as a teacher.

“You can’t tell Catherine’s story without having it be yours,” she said. “You’ve got to speak from knowing what it is to be with patients, people with illness or poor people.”