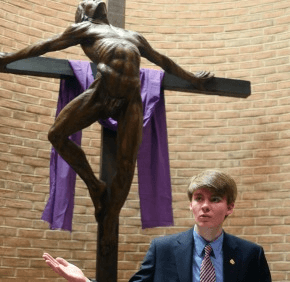 “It’s easy to recognize the star pupil, the No. 1 student in the class, the star quarterback or shortstop,” said David Norton, principal of Mount St. Joseph High School.

The all-boys school in Irvington, however, reserves a special esteem for the service-minded students who make the crowd-pleasing feats possible.

“Service is something our school is about,” Norton said. “They’re giving their time and energy and want to be a part of something.”

Senior Joey Chambers doesn’t see himself as forgoing anything.

“When we host St. Frances, everyone’s all decked out,” he said, “everyone has a role.”

Chambers found his role early on.

“I figured out a while ago that I couldn’t play,” he said. “I figured I could help out.”

He may be making a career of it. Pat Clatchey, the Gaels’ basketball coach, has already reached out on Chambers’ behalf to the staff at Mount St. Mary’s University, where Chambers will study in the fall.

“I’m excited to be one of the managers next year for the Mountaineers,” he said.

While Mount St. Mary’s offers a major in sport management, Chambers is thinking business, which, he said, “can open more opportunities.”

Also envisioning himself as a decision-maker for a professional sports franchise, fellow senior Tom Hoffmeister has also found managing sports – particularly baseball – to be his sweet spot.

He is an Eagle Scout and black belt in karate, but Hoffmeister said he was “never good” at baseball.

A self-described “shy kid,” he is now part of the team. ”

Junior Russ Sullivan reads at school liturgies and assists Father Michael Murphy, school chaplain. Whether he enters finance or the priesthood, he is sure of one thing.

Ask Sullivan a banal question Why do you enjoy reading at Mass? – and the answer is anything but.

“It just fascinates me that you’re reading the inspired word of God to a congregation,” he said. “I’m in awe of that sometimes.”

An altar boy since fifth grade at St. John the Evangelist in Severna Park, Sullivan “stepped into more of a leadership role” as a sacristan a few years later, which informed his service at Mount St. Joseph.

Sullivan said his service gives him a “sneak peek” of the priesthood.

“It’s a service to me, personally,” Norton said. “If I’m talking to some parents, I don’t have to worry about this working or that working.”

Sekira’s interest in what he calls “just a hobby” began his sophomore year, when he ran the spotlight for the spring musical. As older students taught him “from the ground up” to run the sound board and program the lights, his participation grew.

He enjoys the responsibility, and being behind the spotlight as opposed to in it suits him.

“I’m not someone who likes so much focus on me,” he said.

Norton, who coached Gaels’ baseball for 31 seasons, said that the contributions of Sekira, Sullivan, Hoffmeister and Chambers are central to the Mount St. Joseph experience.

Also see:
Beyond the Bell: Our Lady of Mount Carmel a national model of service