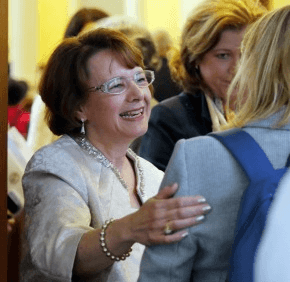 Dr. Marylou Yam will be formally installed as the 14th president of Notre Dame of Maryland University April 17, but an inauguration Mass the evening before displayed the familiar touch she has exuded in Baltimore since starting the job last July.

Archbishop William E. Lori celebrated the liturgy in the Marikle Chapel of the Annunciation.

Concelebrants included Father Robert T. Kennedy, former chaplain of the university, and Jesuit Father Michael Braden, of St. Peter’s University in Jersey City, N.J., Yam’s previous post, which sent more than a dozen of her former colleagues to Baltimore to share in the celebration.

The first and second readings were given by cousins of Yam. The Mass itself was dedicated to the memory of other cousins and her parents, Alma and Eugene Galletta. Four other relatives presented the gifts, including her son, Michael.

Following Mass, a wide-angle lens was required for the family photo that numbered more than 40.

Inauguration week activities included a presentation from Michael Yam, a host on the San Francisco-based Pac12 Network, which covers major college athletics on the West Coast. (Dr. David Yam, her husband, is the cytology manager at Beth Israel Medical Center in Newark, N.J.)

The liturgy included a moving rendition of Franz Schubert’s “Ave Maria,” with Elizabeth Schachterle, of the class of 2017, on violin, and Dr. David D. Morroco, assistant professor of education, on piano.

The responsorial psalm was from Blessed Theresa Gerhardinger, the foundress of the School Sisters of Notre Dame, who in 1895 established Notre Dame as the first degree-granting Catholic college for women in the U.S.

“We are the beneficiaries of the legacy of Catholic education left to us by these pioneering, intrepid and deeply faithful women,” Archbishop Lori said in his homily.

He then referenced the March 2013 installation Mass of Pope Francis: “(He) said, ‘Let us be protectors of creation … Let us not forget that hatred, envy, and pride defile our lives! Being protectors, then, also means keeping watch over our emotions, over our hearts, because they are the seat of good and evil intentions: intentions that build up and tear down! We must not be afraid of goodness or even tenderness!’

“President Yam, in the months you have already served, you have shown yourself to be a leader who protects and fosters these precious gifts of nature and grace.”

In brief remarks before the closing song, Yam thanked all who participated and the Archdiocese of Baltimore.

Yam, who began her career as a nursing educator, is known as a leading researcher on domestic violence.
Under her leadership, Notre Dame became the first university in the state to be granted non-governmental (NGO) status by the United Nations’ Department of Public Information. She has also instituted a visiting ambassador program, which brought the Romanian ambassador to the U.S. to campus.