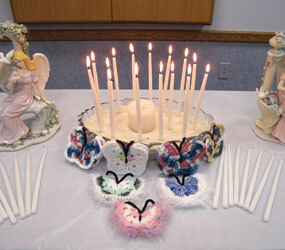 Beth L. Hewett understands the pain and anguish of grief all too well. A facilitator and facilitator trainer for the National Catholic Ministry to the Bereaved (NCMB) and active in the grief ministry of her parish, St. Ignatius, Hickory, she has in recent years lost her brother, sister and father.

“Grief hits you like a sucker punch; you can’t control when it comes or how much it hurts,” said the teacher and author, who has a Ph.D. in English with a concentration in Rhetoric and Composition, as she talked about helping others in their bereavement.

She knows how difficult the Christmas season is likely to be for those who are grieving the loss of a loved one whose absence will be most keenly felt at times intended for celebration.

What often is the most difficult to deal with, she said, is the anxiety, even dread about what the holidays will be like for those who are grieving.

Grief, she said, “can make us emotionally and spiritually sick, and as Christians we are already struggling to keep the true spirit of Christmas, for example.”

“I know from a Catholic perspective,” she continued, “we’re supposed to look forward to death, but we don’t look forward to the gaping loss caused by our loved ones’ deaths. We can do something about it, though. It’s called mourning, which is an active response to the pain of grief. We can use mourning activities to work with our grief.”

Hewett believes that the holidays and the anxiety they provoke can be made more tolerable “if we take charge of how we want them to be.”

“It could be something like establishing a new venue for a holiday event,” she said, “or an empty place setting with a lighted candle, a different tree or even making a grave blanket out of evergreens to keep the loved one ‘warm’ during the cold winter months.

“It’s a matter of doing something. We heal best when we embrace the grief, walk toward it; not run away from it, because it’s not going away. We have to start to take control.”

While there is no archdiocesan bereavement group as such, some parishes, such as St. Ignatius, St. Margaret, Bel Air, and St. Francis of Assisi, Fulton, have strong, active grief ministries with trained facilitators such as Hewett who regularly and frequently organize grief support groups, among other ways of offering help.

Support groups can be “extremely healthy in getting people to work with their grief,” Hewett said, noting that she had been helped by such experiences during her own times of intense grief.

She said help is also available through the NCMB and its website, griefwork.org, as well as through her website, bethhewett.com, where she tells her family’s story of grief in touching detail.

Drop-in grief support groups are ongoing at St. Ignatius on the first, third and fifth Mondays of the month, while a bereaved parent’s group meets on the second Thursday of the month.

People who have experienced loss are invited to participate.

“We ask them to just drop in, try it out,” Hewett said. “Some come and stay with the group for a long time, even years, others for not so long, but they often come back when they feel ready.”

The Catholic faith of those in grief is often “extremely important” to participants but, Hewett noted, non-Catholics are welcome.

The support group, she said, is “an open and welcoming place where they can talk, tell their stories, and share feelings.”

Hewett said she sees the benefits of such sessions firsthand.

She explained: “One person told me how the group had really helped her. She said, ‘When I first came, I sobbed all the time, but now – even though I have bad days – I have good days.’ Then, I’ll see that a woman has her hair styled, or a man’s face looks a little fresher, and that they are less overwhelmed or sad. I know it makes a real difference.”