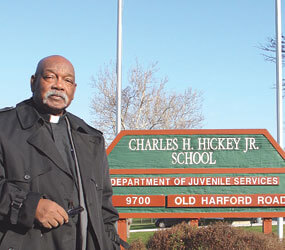 PARKVILLE – Two years ago, Deacon Russell Matthews was taking Communion to a homebound woman in a tough section of West Baltimore when he saw two teens walking in his direction.

With his mind on the Blessed Sacrament, the then-74 year-old deacon thought nothing of the approaching figures until he heard a voice shout to them from across the street.

“Don’t even think it!” the voice boomed.

With those sharp words, the teens darted off.

The warning came from one of Deacon Matthews’s former students, whom he had counseled as the chaplain at what was then the Maryland Training School for Boys and what is now the Charles H. Hickey Jr. School in Parkville.

By intervening on the street, the former student had prevented his mentor from being robbed – or worse.

“I look at that and I say, ‘Lord, as long as you give me strength,” Deacon Matthews said, “I’ll always be there for those kids.’ ”

Ever since Archbishop William D. Borders appointed him chaplain of the training school in 1974, Deacon Matthews has been a constant presence for delinquent youths who live at the detention center while awaiting trial or before receiving other placements.

Ranging in age from 13 to 18, the Hickey youths face a broad range of charges including drugs, assault, battery, theft and carjacking. In his earlier years at the center, some of the boys had been charged with murder and rape.

Deacon Matthews leads an ecumenical Scripture service every Sunday and devotes many hours encouraging students to develop a sense of self-worth. He has been reaching out to troubled teens for half a century, first volunteering as a big brother through the Holy Name Society at St. Francis Xavier in East Baltimore.

“You’d be amazed at the number of boys here who care nothing at all about themselves,” said Deacon Matthews, a former Baptist deacon who converted to Catholicism and joined St. Francis Xavier in 1958. He was ordained a Catholic deacon in 1973.

Hickey teens long for honesty, according to Deacon Matthews, who said they have been raised in environments filled with broken promises.

The deacon’s words of encouragement are powerful, according to Mary Slechter, head of volunteer services at Hickey.

“There are kids who have thought about committing suicide one day,” she said, “and then decided not to the next day because they talked to him.”

Slechter called Deacon Matthews the most non-judgmental and forgiving person she has ever met – a man who shows genuine love for children and who has also been supportive of the staff, she said.

“He brings God with him,” said Slechter, whose own journey into the Catholic faith from Methodism was inspired partly by the loving ministry of Deacon Matthews. “He’s a very special man of God – chosen for us.”

Deacon Matthews, a native North Carolinian who moved to Baltimore in 1957 after serving in the Navy, is a driving force behind an annual Christmas event at Hickey that features a magician.

“The one most blessed thing you can give a child is letting him or her feel that you love them and you care about them,” said Deacon Matthews, who has ministered at St. Ann in Baltimore and St. Francis Xavier.

Although he has suffered several heart attacks and has some difficulty walking, Deacon Matthews has no intention of retiring from his role at Hickey. As the widower put it, once he “kicks off” or can’t work anymore, he prays that someone will step forward to maintain a chaplaincy at Hickey.

“These legs sometimes won’t walk when I get up,” Deacon Matthews said. “They hurt, but it hurts worse to know the boys are not going to be exposed to Scriptures. I pray I can last a little longer.”