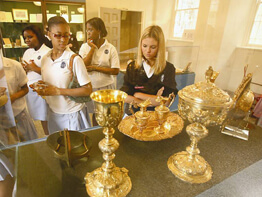 As the 125 high school girls from the Institute of Notre Dame, Baltimore, recently toured the newly restored Basilica of the National Shrine of the Assumption of the Blessed Virgin Mary, they entered a room that features exhibits reflecting the history of Catholicism in the United States.

The room in the co-cathedral’s undercroft is designated as the basilica’s museum – a feature that didn’t exist until the completion last fall of the two-year project that restored the 200-year-old Baltimore landmark to the vision of its famed architect, Benjamin Henry Latrobe.

The eyes of the IND students darted from ceiling to floor in the museum as Elayne Chulis, basilica tour guide, pointed out scores of artifacts in glass cases and the historical time-line of the Archdiocese of Baltimore decorating the upper walls.

“It’s all pretty cool,” she said as her group left the room and traveled to another part of the restored basilica. “It’s interesting to think about the people who wrote those letters and read those books so long ago.”

The room was added to provide an educational component to each person’s visit to the first Catholic cathedral built in the United States, said Mark Potter, executive director of the Basilica of the Assumption Historic Trust Inc.

Before the restoration created an expanded undercroft, there wasn’t enough space in the building to display the artifacts that had either been in storage at the archives of St. Mary’s Seminary and University in Roland Park, or in Cardinal William H. Keeler’s residence, which is adjacent to the Basilica, Mr. Potter said.

The new museum exhibits include a chalice given to Baltimore Archbishop Ambrose Maréchal in 1817 by the first bishop of Boston, an 1806 letter from future President James Madison to Baltimore’s first Archbishop John Carroll, a photo of Archbishop Francis Keough with President Dwight D. Eisenhower in 1953, and the 1789 Papal Decree of Pope Pius VI creating Baltimore as the first diocese of the United States.

Ms. Chulis – a volunteer Basilica tour guide and parishioner of Holy Family, Randallstown – points to a photo of Cardinal Keeler with Pope Benedict XVI in Rome, following his 2005 appointment as the leader of the Catholic Church.

“You can come back for a closer look following the tour,” she said. “I know it’s a lot to take in during the short amount of time we have on this tour.”
However, basilica officials are hoping to complete another room next to the museum in the coming months that will house a rotation of temporary exhibits.

That room is intended to complement what is already on display in the museum and in the hall of the religious, a station on the opposite side of the basilica’s crypt that details the religious orders that have served the archdiocese during the past 200-plus years.

“It reminds us of our shared past, at a time when the first archbishop of the United States traveled by horse to celebrate Mass with people far and wide, and this was his,” he said.