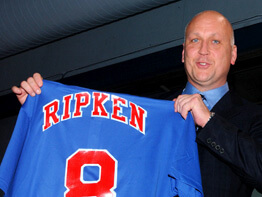 The crowd of students and alumni, teachers and coaches cheered loudly as the Baltimore Orioles’ former shortstop – who is to be inducted into the National Baseball Hall of Fame this summer – appeared in the Morgan Wootten Gymnasium, named for the legendary DeMatha basketball coach who is himself a member of the Basketball Hall of Fame.

“The last time somebody clapped that loud, I had to take a lap around the stadium,” Ripken said, remembering the night in 1995 when he played his 2,131st consecutive game, breaking Lou Gehrig’s record. That night, Ripken ran around the inside of Oriole Park at Camden Yards, high-fiving the fans who cheered him.

The night sponsored by DeMatha’s Alumni Association opened not with the national anthem but with a prayer, offered by the school’s acting rector, Trinitarian Father Tom Burke. His order sponsors the all-boys’ Catholic high school, which has gained national recognition for its academic, athletic and music programs.

“It’s a thrill to be back home,” said CBS Sports commentator James Brown, a 1969 DeMatha graduate who just hosted his fifth Super Bowl. Brown, the master of ceremonies for the night, introduced Ripken saying, “He is a true American sports hero who throughout his life has done it the right way.”

When Brown asked him what the most important thing he learned from his father, Ripken said, “Dad would always say, if it’s worth doing, it’s worth doing right.” He said his father believed the secret to happiness involves finding work in life that you enjoy doing.

Asked what kept him on the right path and away from things like drugs and steroids, Ripken said, “I was scared of my dad!” The father of two stressed the importance of family several times that night, advising parents to know what their kids are doing and talk to them. A friend once told him, “Any time (you spend) with your kids is quality time.”

A boy in the audience asked him, “Is it hard to play in front of a big crowd?” Ripken answered simply, “At first, it’s kind of scary.” Another boy, wearing a baseball cap, asked him about the importance of education and Ripken said, “I was 41 when I retired. You have your whole life ahead of you, and your education (is something) you fall back on. Academics is a life skill. If you want to better yourself in life, period, you need to emphasize school and academics.”

Ripken emphasized the importance of teamwork and consistency, noting that as a ballplayer, he could not always make the game-winning hit or game-saving catch, but he tried to do the little things right to help his team win, like bunting so a teammate could advance to the next base.

“Figure out how to make contributions in daily life … try to find all the things you can do to help your team out,” he said.

Ripken said his favorite current player, Derek Jeter of the New York Yankees, and his favorite past player, Brooks Robinson of the Orioles, both represent the game well on and off the field. He said Jeter once asked him about how he had played so many games in a row, and he answered, “I love to play. I just go out and do my job.”

But Ripken said he has since thought a lot about the traits, values and principles that enabled him to set the record of consecutive games, which now stands at 2,632. Those values, he said, include having the right approach, a strong will to succeed and passion for what you do. He noted that sometimes “in life we’re all going to have bumps in the road,” like the 21 straight games the Orioles lost to open the 1988 season.

He also encouraged people to work to achieve balance in their lives, putting family first. He joked about the time someone approached him for an autograph while he was changing his son’s diaper in a restroom near Cinderella’s Castle in Walt Disney World.

Later, DeMatha junior James Peters, who competes in varsity football and track, said Ripken’s talk helped him think about his own priorities. “It helped me get my organization down, my sports and school life,” Peters told the Catholic Standard, Washington’s archdiocesan newspaper. “He kept his family above everything else, his priorities were straight. It’s a wake-up call for what I need to do.”