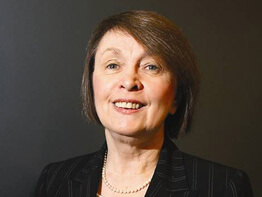 ANNAPOLIS – Dr. Mary Ellen Hrutka prides herself on being one of the best bargain hunters in town. Beginning in the spring, the parishioner of St. John the Baptist in Silver Spring weekly makes her rounds at area thrift stores and yard sales – scouting out and negotiating the best deals possible. Seldom does she return home empty-handed.

“The bargains just leap out at me,” Dr. Hrutka said with a laugh. “I’ve got some kind of magnetic characteristic. It just comes naturally.”

As the first appointed executive director of the newly launched Mid-Atlantic Catholic Schools Consortium, finding bargains will be a big part of the educator’s new job. Dr. Hrutka will be responsible for leveraging the size of the consortium, made up of six regional dioceses including the Archdiocese of Baltimore, to make purchases at reduced rates for schools and dioceses.

Only three months in existence, the consortium has already sealed a deal for a conference call system that will reduce rates by almost 80 percent. Dr. Hrutka has her eyes set on bigger prizes like energy acquisition, supplies, services, utilities and more.

The director is also venturing into the political arena to make sure Catholic school families receive the state and federal benefits due to them, and she’s raising the profile of Catholic schools among business leaders and foundations.

“When we talk to funders and business people, we are greeted by a very positive reaction to Catholic schools and the awareness that they are part and parcel of the quality of life here in the State of Maryland and across the region,” said Dr. Hrutka, an avid aerobics enthusiast and mother of two grown sons with her husband of 35 years.

“Catholic schools benefit everyone,” she said.

Dr. Hrutka had to make some significant sacrifices to take on the challenge of getting the consortium off the ground. The former vice provost and dean of the School of Undergraduate Studies at the University of Maryland University College for some 15 years, she previously managed a staff of more than 80 full-time employees and 1,500 faculty members and participated in university governance and management at the cabinet level. Before that, she taught or served in student service and counseling departments at the University of Maryland, Barry University, Emory University, Trinity College and The Johns Hopkins School of Nursing.

She now is the sole full-time employee of a startup operation with very grand goals.

There was something very appealing about becoming one of the biggest advocates for Catholic education in the region, she said.

It was during Mass a few months ago that Dr. Hrutka felt a direct call to her new ministry. She had already been approached about taking on the leadership of the consortium and she was considering leaving her position at UMUC. At the general intercessions, one of the prayers asked God to give courage to those who are called to ministry.

“I felt it pretty personally,” she said, calling her new post her “dream job.”
“I didn’t leave the university,” she said. “I came to this position.”

Based in a small upper room of the Maryland Catholic Conference building in Annapolis, Dr. Hrutka has hit her job running. A Web site will go up March 19 and she’s planning a Catholic education summit in September focused on Catholic identity, leadership, affordability and accessibility.

A Polish-American native of Yonkers, N.Y., Dr. Hrutka said she loves the concept of the consortium and sees it expanding or being duplicated in other parts of the country.

“This is our first attempt to work collaboratively on a large scale,” she said. “We want to ensure the future of Catholic education remains bright and remains affordable and accessible.”