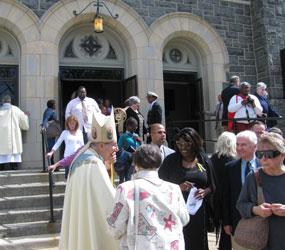 Ben Gregorek’s eyes widened as he scanned the inside of Baltimore’s Church of the Blessed Sacrament. It had been decades since the 47-year-old had stepped foot in the church, and he thought about the many prayerful days he spent as a child with his mother there.

“This is the church I was baptized in,” Gregorek said. “This is real special to me.”

Gregorek was among many former parishioners of Blessed Sacrament who returned for its 100th anniversary Mass Sept. 18. Longtime parishioners, such as Wilma Myles and Helen Scott, welcomed back old friends with smiles and warm embraces.

“You see so many people that were young people and young adults and now they have their own families and their own kids,” said Myles, a parishioner of 55-plus years. “I knew some of their parents. It was just a close-knit group.”

All of that was on display during a weekend of anniversary celebrations, which included a Sept. 17 gala attended by nearly 130 people at Columbus Gardens.

The parish has been an anchor in the surrounding Pen Lucy community. The parish’s former convent is now home to the Marian House for women leading lives post-addiction or post-homelessness. Scott said the parish maintains that building and the former school, which houses Safe Haven shelter.

The parish has been through its share of struggles. Scott said there are fewer parishioners than decades ago. But, Blessed Sacrament is seeing a renaissance thanks to lay people taking on larger leadership roles.

“They’ve given their time and the talent,” Myles said.

During closing comments at the Mass, Father Muth said Blessed Sacrament is only starting to make history thanks to a spirit of selflessness and prayer.

With that, the hundreds assembled rose to their feet applauding and shouting “Amen!”