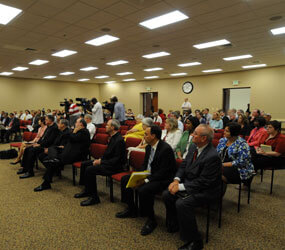 Archbishop Edwin F. O’Brien said he was “minding my own business in Rome” while attending World Youth Day events when he learned Pope Benedict XVI want to appoint him Pro-Grand Master of the Equestrian Order of the Holy Sepulcher Aug. 17.

“I was really in a daze for two days,” said the archbishop during an Aug. 29 press conference announcing his new role. “It took some getting used to. It does show the importance that the Holy Father holds of the presence of church in the Holy Land.”

The archbishop, who will serve as apostolic administrator of the archdiocese until his successor is named, said “to remove a resident archbishop of a major archdiocese to a task such as this shows the priority the Holy Father has and that I better have in my life.”

Bishop Mitchell T. Rozanski described the announcement as “totally unexpected,” while Bishop Denis J. Madden said “it was a shock for all of us.”

Estella Chavez, a secretary to the archbishop who has worked for the archdiocese for some 16 years, said she really admires Archbishop O’Brien and hates to see him go.

“I can tell that he loves being a priest,” said Chavez, who received a personal call from the archbishop. “He has worked so hard for education even though he has had to face some difficult situations. I admire his strong faith and how he upholds the principles of our faith.”

She touted his work for vocations.

Bishops Madden and Rozanski both said they think the archbishop had so much more he set out to accomplish here.

“He saw this, just looking at his age, as his last assignment as bishop – most likely,” said Bishop Madden. “And so, he had set about, I think, very courageously to work with the schools. And that took a lot of courage and foresight. Then he was getting ready and had begun to tackle the issue of how we can address the pastoral needs of all the parishes – another very courageous thing. He started out the major campaign to support all of these initiatives. I think his vision was to stay here and to see it through here. ”

When reflecting on the archbishop’s leadership style, Bishop Rozanski said the spiritual director of the Premier See is “a man who listens, takes in facts, makes a decision and goes with it.”

Bishop Madden, who served as associate secretary general of the Catholic Near East Welfare Association and director of the Pontifical Mission for Palestine office in Jerusalem, said that in his new role, Archbishop O’Brien will listen, “but he’ll be very definitive about the way things have to move.

“The Equestrian Order of the Holy Sepluchre can do a lot of good – not only in building clinics and schools, but also in exerting influence.”

The archbishop said one of the challenges he faced during his tenure was the restructuring of the school system.

Dr. Barbara McGraw Edmondson, who was appointed as superintendent for Catholic schools by the archbishop, said Archbishop O’Brien knew something needed to be done.

“It needed to be something bold and he was willing to do that knowing that he would certainly have supporters who would rally around him and he certainly would have critics, but he knew that unless he moved forward and he supported some great change, that our schools could possibly not be here in the long term and he was very committed not only to Catholic schools in general, but very concerned that we – our parishes and our schools – remain present in our communities,” she said.

Archbishop O’Brien has been a major proponent of Catholic Charities, and Director Bill McCarthy said the organization has been grateful for his support.

“That’s one of my greatest impressions, is visiting these Catholic Charities institutions and seeing the tremendous grassroots collaboration and energy that goes in every day,” the archbishop said during the press conference.

“During the blizzard two winters ago, I got a call from the archbishop, asking if I needed help, if he could come down and help serve a meal,” McCarthy said. “Fortunately, my son and I and others were there covering the meal, but the fact that he thought of the hungry of Baltimore, needing to be fed, with all else going on, was absolutely remarkable.”

David W. Kinkopf of Gallagher Evelius and Jones, who represents the archdiocese in many legal matters, said the archbishop confronting the city over pregnancy center signage laws is an example of “Archbishop O’Brien’s strength and courage and commitment to upholding so strongly what he believes in and models so strongly.”

“He’s very clear, a great teacher, and is very much willing to stand up for what’s right and do the right thing, whatever difficult circumstances,” Kinkopf said.

Diane Barr, chancellor for the archdiocese, said that when it comes to the archbishop’s management style, “I really appreciate that he can give me the support I need and at the same time, allow me the freedom to do my job well and be available to pastors, the presbyteral council, and take on new ideas and let us run with them, particularly the presbyteral council.”

Monsignor Owen F. Campion, associate publisher of Our Sunday Visitor, has known Archbishop O’Brien for almost 30 years, since then-Father O’Brien was communications director for the Archdiocese of New York.

“Everything he has done for the church in his years as a priest and as a bishop, he’s done well. He’s a man of strong faith, a priest to the bone, and a churchman. I think he will bring these qualities to the service of the church Rome and in particular to the Order of the Holy Sepulcher.”

George Matysek and Paul McMullen contributed to this story.