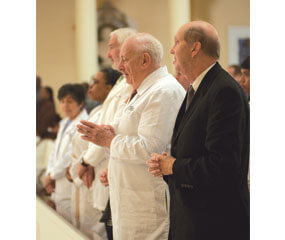 During his time in the Archdiocese of Baltimore, Archbishop Edwin F. O’Brien has prominently supported medical professionals, whose conscience rights have been threatened on the federal and local level.

At the Oct. 16 White Mass at the Basilica of the National Shrine of the Assumption of the Blessed Virgin Mary, the Baltimore Guild of the Catholic Medical Association noted his hand in it being named the CMA’s Outstanding Guild for 2011.

“I am convinced,” said Dr. Marie-Alberte Boursiquot, president of the Baltimore Guild, “that your support contributed to that award.”

Boursiquot presented Archbishop O’Brien, apostolic administrator of the archdiocese and pro-grand master of the Equestrian Order of the Holy Sepculcher of Jerusalem, with a portrait of St. Luke, the patron of physicians.

In his homily, Archbishop O’Brien noted the “render unto Caesar” theme of the day’s Gospel reading, Matthew 22:15-21.

“Are we not citizens of two worlds?” he asked. “Wouldn’t it be a blessing for the medical profession if the two worlds were in harmony?”

“The church seeks nothing more to express itself,” he said, imploring all in the health field to speak out on those and other issues. “We look to you to resist Caesar’s encroachment.”