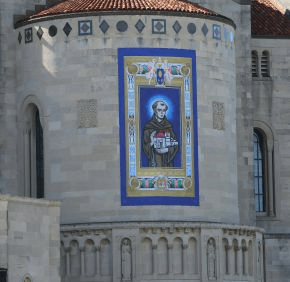 By Erik Zygmont
ezygmont@CatholicReview.org
Twitter @ReviewErik
WASHINGTON – “Rejoice in the Lord always! I say it again rejoice!”
The thousands of faithful in attendance at the Sept. 23 canonization Mass for St. Junípero Serra had found multiple reasons to rejoice prior to Pope Francis’ exhortation in his homily.
After roadblocks, delays and traffic jams – all endured joyfully with the prospect of seeing the Holy Father – they rejoiced upon reaching the Basilica of the National Shrine of the Immaculate Conception. After hours in the heat, as the longest line many of them will ever experience inched forward excruciatingly slowly, they rejoiced upon passing through security. They rejoiced one more time as they caught a glimpse, at long last, at the Holy Father as he arrived in his surprisingly quick and agile popemobile, smiling and waving as he zipped through the crowd.
Throughout the day, jokes had been made about Catholics’ value for suffering, or about St. Junípero Serra’s traverse of what is now California, hobbled by a venomous spider’s bite to his leg.

Father James Sorra, third priest from left, is joined by fellow priests and young men in discernment with the Archdiocese of Baltimore at the canonization Mass of St. Junipero Serra. (CR Staff / Erik Zygmont)

“Oh, you forgot your sun hat?,” snarked an overheated pilgrim in one of the endless lines. “Well, Junípero Serra limped across California.”
Pope Francis wasn’t joking, however, when he warned against comfort and complacency.
“Something deep within us invites us to rejoice and tells us not to settle for placebos which simply keep us comfortable,” he said in his homily.
“We don’t want apathy to guide our lives – or do we?” the pope continued. “What can we do to keep our heart from growing numb, becoming anesthetized? How do we make the joy of the Gospel increase and take deeper root in our lives?”
The answer, Pope Francis, can be found in Jesus.
“Jesus sends his disciples out to all nations,” he said. “To every people.”
To the people of the most developed nation in the world, he noted Jesus’ willingness to embrace the “dirty, unkempt, broken.”
“Far from expecting a pretty life, smartly dressed and neatly groomed, he embraced life as he found it,” the pope said.
He closed with the motto of St. Junípero Serra: “Keep moving forward!”
“I loved that quote,” said Father Brian Nolan, chaplain and director of campus ministry at Mount St. Mary’s University in Emmitsburg.

He and a contingent of priests from the Archdiocese of Baltimore, along with Baltimore Archbishop William E. Lori and Baltimore Auxiliary Bishop Denis J. Madden, concelebrated the Mass with Pope Francis.
“We’re called to do that as a church – to the ends of the earth,” Father Nolan continued. “Every one of us is called to do that in our own place, though it doesn’t have to be as dramatic as that.”
Father Michael DeAscanis, pastor of St. Philip Neri in Linthicum, was awed by the dramatic celebration.
“Somebody said, ‘Nobody but the Catholic Church can organize a celebration like this,’” he said.
“It’s because no one has a reason to celebrate as much as the Catholic Church, which celebrates the presence of Jesus here on earth with us.”
St. Junípero Serra, too, “was almost tangibly present,” Father DeAscanis added.
Conventual Franciscan Father Matthew Foley, campus minister and religious studies instructor at Archbishop Curley High School in Baltimore, said the experience left him “stunned.”
“It takes a lot to almost stun me,” he said, “to have me at a loss for words.”
“I think it was such a beautiful vision of the church, here in D.C.,” he added. “Once again, the Holy Father is reminding us to be messengers of mercy and to share God’s mercy, and nobody is outside God’s mercy.”
Joe Szczybor, 20, attended the Mass with the archdiocesan Office of Vocations, accompanied by several other young men in discernment.
“I loved being so close to Pope Francis,” he said, “but not just seeing him as a celebrity, but worshiping God with him.”
Father James Proffitt, pastor of St. John the Evangelist in Severna Park, said that he hopes Pope Francis’ visit to the U.S. will get spiritual wheels turning.
“I would hope that first and foremost, it would be an occasion where people who have strayed from the faith might reconsider their faith,” he said.
Before Pope Francis, Father Proffitt concelebrated Masses with Saint John Paul II, at Camden Yards in 1995, and with Pope Benedict XVI, at Nationals Park in Washington in 2008.
Monsignor James Farmer, pastor of St. John in Westminister, who also concelebrated with the previous two popes, called Pope Francis’ visit “a great spiritual opportunity.”
“We realize that the successor of St. Peter is on our soil,” he said, “and that reality connects us to the roots of our faith.”
“We pray that Pope Francis’ visit will inspire all of us to lead a more Christ-like life, and see the presence of Jesus in each person we encounter,” he added.