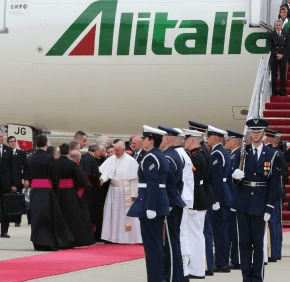 By Maureen Cromer
mcromer@cathoicreview.org
Twitter: @CatholicReview
JOINT BASE ANDREWS – It was a moment those present will never forget.
With Pope Francis aboard, Shepherd One touched down at Joint Andrews Base in Prince George’s County at approximately 3:55 p.m. Sept. 22.
As the young men of the DeMatha Catholic High School band performed, those in attendance kept spirits high and the faith strong as they danced along the bleachers and challenged one another to out-cheer those opposite of them.
Suddenly, all went quiet as one voice shouted “lights!” Seconds later, the papal plane was visible to all those watching in anticipation – inciting more cheers.
Under cloudy skies and scattering drizzles, hundreds of people crowded four small bleachers to welcome Pope Francis to the United States. Amid cheers and camera shutters, exclamations of support, excitement and pure love filled the air.
From the very moment the faint lights of Shepherd One could be seen, to the moment Pope Francis pulled away from Joint Base Andrews, the cheers that filled the air were some that could rival those heard in stadiums across the country.
People came from far and wide to welcome Pope Francis to Washington, D.C. on his apostolic journey of love and mercy. Media, clergy and politicians were straining to catch the first glimpse of the “People’s Pope” as he took his first steps on U.S. soil since becoming pope in 2013.
Archbishop William E. Lori was among Catholic leaders who greeted the pope after he stepped off the plane and was welcomed by President Barack Obama and his family.
Pope Francis will spend two days in D.C. before heading north to New York City on Thursday evening.
On Wednesday, the pope will be formally welcomed into the White House to meet with President Obama. Following that meeting, the pope will travel in the iconic “popemobile” along the National Mall to thank the millions that have come out to see him.
The Holy Father’s schedule continues with a midday prayer with U.S. Bishops at St. Matthew’s Cathedral followed by the Canonization Mass of Blessed Junipero Serra.
Thursday, on his final day in D.C., Pope Francis will address a joint session of Congress before making his final stops at St. Patrick’s Catholic Church and Catholic Charities of the Archdiocese of Washington before departing for New York.