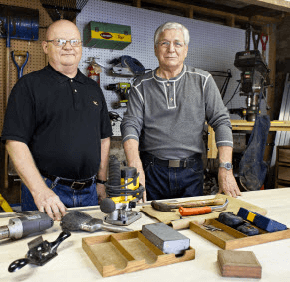 By Elizabeth Lowe
elowe@CatholicReview.org
Twitter: @ReviewLowe
Charles “Bud” Smith still gets emotional when he talks about handcrafting a wooden box used to store a statue that was presented to Blessed Pope John Paul II during his October 1995 visit to Baltimore.
“Eighteen years later I can hardly talk about it without getting goose bumps,” said Smith, 70, a parishioner of St. Joseph’s Passionist Monastery in Irvington. “It baffles me sometimes. How many people can say they’re still around and built something for a (soon-to-be) saint?”
As Smith, a cabinet and furniture maker by trade, explains, one night in September 1995 he met a man from Baltimore’s Katyn Memorial Committee – which eventually would commemorate the 1943 mass execution of Polish nationals by Russians with a statue in Harbor East.
The connection needed someone to make a small box to hold a 16-inch bronze cast statue commemorating the atrocity, which was to be presented the very next month to Pope John Paul II.
“I said ‘I’ll build the box,’ ” said Smith, vice president of operations for Thompson Industries in Rosedale. “It didn’t dawn on me (immediately) that I said I was going to build a box for Pope John Paul II.”
Once it sunk in, Smith remembers thinking to himself “what have I done?”
Smith’s wife, Nancy, suggested he ask Gerard Rzany, a cabinet maker at Thompson Industries, to help build the box.
“It took him (Rzany) not even a second to say yes,” Smith said.
“It was the biggest honor, the most important job because it was presented to Pope John Paul II,” said Rzany, 56, a native of Poland and parishioner of Holy Rosary in Fells Point.
Smith made the box using seven materials, to represent the seven sacraments and the seven hills of Rome. The wood consisted of mahogany, maple, ebony and rosewood. He and Rzany used glue – not nails – to assemble the box, about six inches tall, eight inches wide and 18 inches long.
Smith and Rzany estimate they spent about 240 hours on the project, at work and in Smith’s detached two-car garage at his home in West Baltimore.
They donated their services to the memorial committee. To thank Rzany, Smith procured two tickets – for Rzany and his wife – to attend the Mass Pope John Paul II celebrated at Oriole Park at Camden Yards.
Preparations for the pope’s visit included the FBI inspecting the box, Smith said. Baltimore’s then-mayor, Kurt L. Schmoke, presented the boxed statue to the pope, whose canonization date is expected to be announced later this month.
Smith believes the box and statue are stored at the Vatican Museums. He hopes to clarify their whereabouts next month, when he travels to Rome.
“To find that (catalog) number,” Smith said, “I would love to get that and share a copy with Gerard.”
He and his fellow craftsmen describe their relationship like that of brothers.
“The box,” Rzany said, “gave us a closeness.”
“For a couple guys of basic, regular backgrounds,” Smith said, “that were given a gift and able to use that for something like this, it takes me over sometimes.”
Also see:
Benefactors make Sisters Academy possible
Fresh start: St. Ignatius Loyola Academy opens at new location
PrevNext