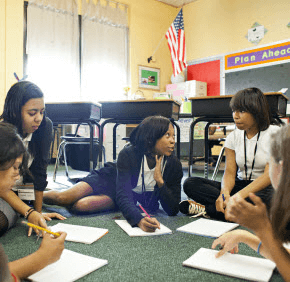 By Elizabeth Lowe
elowe@CatholicReview.org
Twitter: @ReviewLowe
The relationships students at Sisters Academy of Baltimore build with their sponsors are meaningful and lasting.
Just ask Shakiera Keyser.
“It was more than her paying for my education,” said Keyser, a 2009 graduate of Sisters Academy who exchanged letters with her sponsor. “She got to know who I was. I wanted to make her proud and let her know that her investment was valued. A lot of times the sponsors became a part of your family.”
Sisters Academy, which welcomed its 10th class this fall, is a tuition-free school that serves girls from low-income neighborhoods in grades 5-8. It could not exist without its 1,000-1,200 annual donors, said School Sister of Notre Dame Delia Dowling, president.
“All of those who have had a part in this should feel proud of what’s been accomplished over the years,” said Sister Delia, who noted a scholarship for each student is $6,000.
Benefactors who keep the school operating include Tom Galloway and his wife, Colleen. They have helped sponsor two Sisters Academy students over the years.
“These are strong young ladies who recognize the opportunity they are given and work extremely hard in school,” said Galloway, whose family worships at Church of the Nativity in Timonium. “If you want to see your contributions, whether they be time, talent or treasure, at work firsthand, become a benefactor at Sisters Academy.”
The school offers a holistic approach to education, said Tom Rice, chairman of Sisters Academy’s board of directors.
“It’s social graces, it’s discipline, learning to live in society in a thoughtful way,” Rice said. “There’s religious consideration. It’s a sound approach to teaching these young women how to thrive in society.”
“It’s more than just giving money,” said Cyrile Sincock, president of the Maryland State Board for the Ladies Ancient Order of Hibernians. “We’ve enjoyed and loved our experiences there.”
Over the years her organization has sponsored two Sisters Academy students and continues to make regular donations to the school, Sincock said. Members of the organization attend school-sponsored events, including spaghetti dinners.
The school is sponsored by the School Sisters of Notre Dame, the Religious Sisters of Mercy, Sisters of Bon Secours and Sisters of Notre Dame de Namur.
“The idea for a new school came from people in Southwest Baltimore,” Sister Delia said.
Since Sisters Academy opened in 2004, 77 girls have graduated, Sister Delia said. All students in the school’s first graduating class, the Class of 2008, earned high school diplomas.
“Everybody is still in school who has graduated from us – and that’s significant,” Sister Delia said. “The years (ages) from 10 to 13 are a time of incredible growth and change. It’s amazing the changes that take place over the four years.”
Those changes include growth in leadership, academic accomplishments and confidence.
Keyser, the Sisters Academy alumna, credits her alma mater with teaching her to be a leader and for her willing-to-try-anything attitude.
She acknowledges School Sister of Notre Dame Virginia Brune, her religion and math teacher at Sisters Academy, as “the primary reason” she is pursuing a career in education. Keyser, who graduated from St. Paul’s School for Girls in Brooklandville last spring, is at Salem College in Winston-Salem, N.C., where she plans to major in elementary childhood and special education.
“Sisters Academy is a really good place,” Keyser said. “It’s changed my life for the better.”
Also see:
Fresh start: St. Ignatius Loyola Academy opens at new location
For more articles on Catholic education, click here.
PrevNext