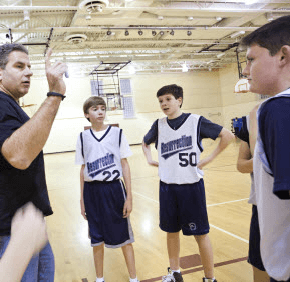 After his family moved to Maryland last fall, Jon Ellwanger aspired to coach basketball at his children’s new school, Resurrection-St. Paul in Ellicott City, as he had at his previous parish and school in New York.

In order to assume the role, he, like every other staff member or volunteer who works with children in the Archdiocese of Baltimore, underwent a background screening.

His background check was the 100,000th screening conducted by the archdiocese since the process was implemented in 2003, according to Alison D’Alessandro, director of the archdiocesan Office of Child and Youth Protection.

LexisNexis, the company who provides the screenings, confirmed in January the archdiocese had hit the benchmark. The archdiocese has screened and trained more people for child protection efforts than any other organization in Maryland, D’Alessandro said.

The 100,000 milepost demonstrates the archdiocese’s commitment to creating “a culture in which the abuse of children is not tolerated, and in which we can all be confident young people are safe,” said Archbishop William E. Lori.

Brian Rogers, chairman of the archdiocesan Independent Review Board that oversees compliance with child protection policies, echoed the archbishop’s affirmation of the screening policy.

“This milestone reflects years of hard work on the part of many individuals to ensure that our kids are safe,” Rogers said. “It’s testimony to how seriously the archdiocese takes its responsibility to protect young people.”

The archdiocese screens potential staff members and volunteers through LexisNexis Volunteer Select, an online screening program for nonprofit organizations that can check criminal court records; national, regional and state databases; and federal and county courthouse documents, according to its website.

In addition to a background screening, staff members and volunteers who would have substantial contact with youth also complete an application, provide three references, complete STAND training, and read the archdiocese’s Code of Conduct for Church Personnel and Statement of Policy for the Protection of Children and Youth.

A screening coordinator at each school and parish ensures potential staff members or volunteers receive a background check, D’Alessandro said.

All U.S. dioceses are required to implement “safe environment” programs, which are audited by the U.S. Conference of Catholic Bishops’ Office of the Secretariat of the Child and Youth Protection.

The office does not track the total number of people dioceses have screened and trained, so it cannot compare the number of screenings in the Archdiocese of Baltimore to that in other dioceses, said its associate director Mary Jane Doerr.

However, the 100,000 mark is “evidence that dioceses are taking the Charter seriously and continue to do so,” she said.

In 2003, the archdiocese fully implemented mandatory background screenings and training in response to policies outlined by the U.S. bishops’ Charter for the Protection of Children and Young People, also known as the Dallas Charter. The Charter was crafted in 2002 in response to widespread sex-abuse allegations against Catholic priests and religious.

In the decade since the Charter’s implementation, the Catholic Church has undergone an “amazing culture shift,” D’Alessandro said.

“The church really has been a leader in the area of child protection,” she said. “On a state level, the archdiocese has been viewed as an example of working very hard to create safe environments through the screening and training.”

A father of three and parishioner of Church of the Resurrection in Ellicott City, Ellwanger, 44, works in law enforcement. He said he thinks the screening “is absolutely needed.”

“I’m very sensitive to the things that can happen if people aren’t vetted,” he said.

The 100,000 figure is equivalent to nearly one-fifth of the Catholic population in the Archdiocese of Baltimore but includes re-screenings of volunteers and staff, who are required to update their screenings every five years.