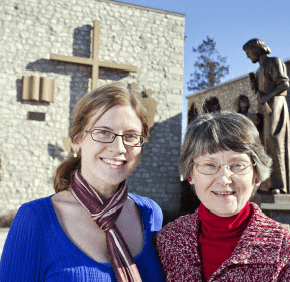 By Maria Wiering
mwiering@CatholicReview.org
Twitter: @ReviewWiering
COCKEYSVILLE – The two fourth-grade classrooms set telling scenes.
One has the air of order and simplicity, with ample chalkboard space framing the smartboard for extra writing surface.
Next door, tiny patches of chalkboard space peak through layers of colorful posters, student projects and reminders to be courteous. A can of shaving cream sits on the chalkboard ledge, next to a yardstick topped by a puppet. Across the room is an aquarium with hermit crabs, the class pets.
The first classroom belongs to Georgia Moonis, a longtime teacher at St. Joseph School. The other is managed by Mary Noppinger, a 2002 graduate of the K-8 school who returned as a teacher. Noppinger attributes her success to the organization and responsibility taught her in fourth grade by Moonis, who continues to be a role model.
Noppinger – an enthusiastic 24-year-old, third-year teacher – describes Moonis as her “mentor.”
“It’s really good to have someone who has especially been here for awhile and knows the ropes and knows me from when I was younger,” she said. “It makes it so much easier having that mentor.”
It is a role Moonis is quick to underplay.
“We are partners,” she insisted, as the two sat side-by-side in undersized chairs in Noppinger’s classroom. “We are on equal footing.”
Moonis has taught at the kindergarten-to-eighth-grade school since 1976, a few years after her college graduation. Noppinger was the third sibling in an active St. Joseph family to pass through Moonis’ classroom, and she credits her teacher with imparting the organization skills that kept her on the path to teaching.
Noppinger knew from an early age she wanted to teach, and has fond memories of playing school with stuffed animals in her basement. She struggled with a learning disability that made her forgetful and disorganized, but recalls Moonis as patient, flexible and accommodating of the extra time she needed to complete assignments.
“She was so obviously very determined to make sure that I would get back on track,” Noppinger said. “It was ultimately teaching me responsibility, and I honestly think that if I had not been in her class, I would have not learned that responsibility.”
She admits she still struggles with organization, and still looks to Moonis for inspiration.
“She’s the organized one; she’s on top of things,” Noppinger said. “I just have all of these ideas that I want to do.”
“We complement each other,” Moonis said.
Moonis admires Noppinger’s creativity and aptitude with technology. She pointed to Noppinger’s novel approach to teaching phonics – students write words into a layer of shaving cream on their desks, marking words’ syllables with finger-drawn slashes.
Cheap, but messy, Noppinger said with a smile.
St. Joe has been a supportive place to learn to teach, she said. She feels comfortable talking to other teachers about her challenges and seeking advice, she said.
It was hard, however, for Noppinger to transition from “Miss Moonis” to “Georgia,” she said with a laugh.
Noppinger is Moonis’ only former student to become a colleague, and seeing her succeed in teaching is welcome affirmation.
“You just hope and pray you’ve made a positive influence,” Moonis said. “Most of the time you don’t see the fruits of your labor.”
For more stories on schools, click here.
Related articles: St. Joseph, Cockeysville, launches new website
Cockeysville students win at science fair, oratory contest
Copyright (c) Jan. 23, 2013 CatholicReview.org
PrevNext