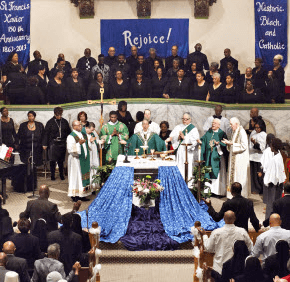 Bernadette Owens could not stop smiling as she talked about the 150th anniversary of her parish, St. Francis Xavier, Baltimore.

“It’s just great,” Owens said, standing in the church’s narthex on a mild January morning. “This is wonderful, just part of the rich history in East Baltimore.”

Owens was one of about 400 people who filled the church and undercroft Jan. 20 for a special Mass to begin St. Francis Xavier’s yearlong anniversary celebration.

To view a slideshow of the event, navigate the arrows below.

During his homily, Archbishop Lori called the Archdiocese of Baltimore “a diocese of firsts.”

In addition to St. Francis Xavier “as the first African-American Catholic community in these United States,” he cited the archdiocese as the Premier See, the first diocese in the U.S., and the Basilica of the National Shrine of the Assumption of the Blessed Virgin Mary in Baltimore, the first metropolitan cathedral in the country.

Archbishop Lori continued, “We’re here to say thanks. … For the next 150 years, may we and those who come after us heed Mary’s command.”

Throughout the two-hour liturgy, the parish’s gospel choir repeatedly brought the congregation to its feet – literally – clapping and swaying to the music. There was also liturgical dancing.

After Mass, clergy and the faithful gathered outside at the corner of Oliver and East Caroline streets for the unveiling of a street sign named after the parish. A reception followed.

John Wheatland, a parishioner of St. Francis Xavier for more than a quarter century and chairman of the 150th anniversary executive committee, said as the first sesquicentennial event, this liturgy “set the tone for the rest of the year.”

“We’re very excited about this and hopefully not only will it be a great thing for the church this year, but I’m hoping as a result of this that we’ll also have an opportunity to do some evangelization and reach out to the community,” he said.

Events this year are expected to include a revival weekend March 8-10; youth retreat in June; genealogy event in October; homecoming weekend in November; and guest homilists at Masses throughout the year, Wheatland said. Events and details are being finalized.

“The parish has been blessed with very hardworking people,” said Father McLinden, who noted the parish has 685 families.

At St. Francis Xavier’s founding, Masses were held at the former St. Mary’s Seminary on Paca Street and St. Ignatius on North Calvert Street. In 1863, a building was purchased at the corner of Calvert and Pleasant streets and in 1932, the parish moved to Caroline and Eager streets. Since 1968, the parish has been at its current location.