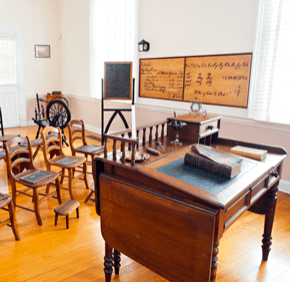 By Paul McMullen
pmcmullen@CatholicReview.org
Photos by Tom McCarthy Jr.
tmccarthy@CatholicReview.org
EMMITSBURG – As the Archdiocese of Baltimore prepares to celebrate the 225th anniversary of its establishment, it’s important to note that the Premier See was also a pioneer in Catholic education.
Nowhere is that history more evident than in Emmitsburg, where St. Elizabeth Ann Seton opened St. Joseph’s Academy and Free School in 1810.
According to the Daughters of Charity, it was the first free Catholic school for girls staffed by religious women. It educated local girls, as well as boarders from as far away as New York and Philadelphia.

The White House, on the grounds of the National Shrine of St. Elizabeth Ann Seton, includes a reproduction of her first classroom, with 19th century furnishings and texts that reference the era. That classroom is opposite the chapel where many Sisters of Charity, the order founded by Mother Seton, took their vows.

The White House is part of the Seton Shrine, which is open for tours Tuesday-Sunday, 10 a.m. to 4:30 p.m., and awards a youth patch for school groups who learn about the legacy of Mother Seton. There is no admission fee, but the shrine suggests a donation of $3 per person.
Archbishop William E. Lori celebrated Mass at the Seton Basilica Jan. 4, the feast day of St. Elizabeth Ann Seton.