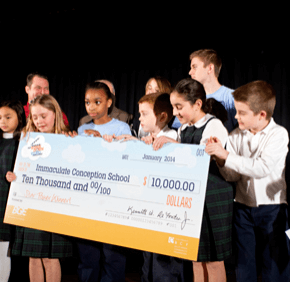 By Elizabeth Lowe
elowe@CatholicReview.org
TOWSON – Immaculate Conception School students and faculty filled the auditorium Jan. 23, anxiously awaiting a safety presentation from Baltimore Gas and Electric Company.
Following the presentation, students and faculty were informed they had won the 2013 BGE “Wires Down” video challenge. The prize was $10,000 for their variation of BGE’s original “Wires Down” TV commercial.
The auditorium was immediately filled with cheers and squeals of excitement.
“They have worked hard for two years, trying to earn this,” said Madeline Meaney, principal. “I’m so happy for them.”
Eight students, three staff members and one parent worked on the video last fall.
The money will be used to update the auditorium, which was constructed in the 1950s, said Father Joseph F. Barr, pastor of Church of the Immaculate Conception. The stage curtains, lighting and sound system will be replaced. Improvements are expected to be completed over the summer, before the start of the 2014-15 school year.
“It’s an honor for the school,” Father Barr said.
“It feels amazing to have $10,000,” said Tyler Cahill, a fifth-grader and one of the students in the video. “The hardest part was that it took so long to do. It was fun, but hard.”
Putting the money toward updating the auditorium is a good use of the funds, said Ella Caine, a fifth-grader and another student in the video.
“I was so excited and I couldn’t believe it,” Ella said of her school winning the prize.
Interested in purchasing a photo from today’s event? Click here.
Also see:
Young adults at the helm of fight for life
Tuition chart highlights cost of area high schools
PrevNext