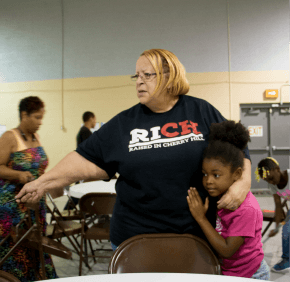 By Erik Zygmont
ezygmont@CatholicReview.org
Twitter: @ReviewErik
The 36 kids enrolled at St. Veronica Summer Academy enjoy some things that many take for granted – two nutritious meals, a snack, air conditioning and a safe space to play.
Cathy McClain, who manages the camp, tries to give the 6- to 12-year-olds something else, too.
“Most of them need a hug,” said McClain, 61, a five-decade parishioner of St. Veronica in Cherry Hill, which hosts the camp.
She wasn’t being trite.
“We have two boys whose mother died a month ago,” she said. “We have a girl whose father was murdered on his way to pick her up on her last day of school.”
Two of her campers have autism, she said, and two are homeless. McClain said that 26 of them have attention deficit hyperactivity disorder, known as ADHD.
In short, they are “the kids all the other camps don’t want to have,” because “they require so much extra attention,” she said.
McClain and her staff are happy to oblige.
Rachel Younger, 33, the head teacher, commutes from Virginia every other day, staying with her family, parishioners of St. Veronica for four generations.
“I come where I feel like I’m needed, I guess,” Younger said.
She acknowledged that the kids aren’t the only ones who benefit.
“There’s a different kind of relationship you form with kids who really need you,” said Younger, a private tutor who also works with “what I would consider privileged kids.”
Funding is tight. Every year, McClain applies for a grant, but this year, she had to improvise, she said.
“The funding sources we normally use were put into the areas directly affected by the violence after Freddie Gray’s death,” she said, adding that the staff at St. Veronica Summer Academy are a combination of paid and volunteer.
“Wait, let me straighten that out,” she clarified. “Nobody gets paid; they get stipends.”
Either way, the staff seems to enjoy their jobs.
Younger led the kids in a post-lunch, let’s-see-how-well-you-pay-attention exercise, establishing a pattern in their minds only to break it.
After several variations:
“When I clap twice, you clap once.”
Younger clapped twice; the kids clapped once.
“Oh my gosh,” Younger exclaimed. “That is the first time you guys got it.”
McClain took advantage of their attentiveness, informing them that somebody had thrown out an entire lunch.
“There are people who don’t get to eat,” she said, reiterating to the kids to put unwanted food on the “share table.”
During the kids’ five-and-a-half hours at camp, they eat breakfast, study academics, play outdoors, journal, garden and learn to cook.

They also learn conflict resolution skills, of which McClain can claim some knowledge, having launched Cherry Hill’s Safe Streets program in 2008 and managingit for five years. She notes that a lengthy period – more than one year – without a homicide in the neighborhood ended earlier in the summer.
Still, she harbors no illusions about the state of affairs, especially since Gray’s death in police custody in mid-April, leading to riots and a spike in the murder rate.
“The crime stats have been off the hook since then,” she said, adding that she wants her campers to stay out of them.
“The goal is to keep them from becoming victims,” McClain said, adding that one way to do so is to “teach them that every action has a reaction.”
More than helping campers survive, though, she wants to teach them to thrive.
“We want them to know that there are more ways to get out of their circumstances than sports,” she said.
“They need a clearer picture of their abilities and the opportunities that are out there,” Younger put in.
“They could get an academic scholarship,” McClain said. “They could get an internship that leads to a career.”
St. Veronica Summer Academy began about 20 years ago as a vacation Bible school catering to parishioners.
“Then, we realized that a lot of the kids in the neighborhood had no exposure to anything related to God,” McClain said.
Today, the camp remains linked to the parish. Father Stephen Ositimehin, the pastor, drops in for Bible stories and discussion and tends to stick around to interact with the kids.
Coming from a relatively peaceful region in Nigeria, Father Ositimehin had been warned about crime in Cherry Hill, but his attitude, he said, was, “Let me see for myself.”
“I came here with some anxiety,” he said, “but it’s a good community.”
He attributed the relative lack of bloodshed to “a whole lot of community efforts.”
McClain doesn’t plan on letting up on her end anytime soon.
“I guess taking that whole idea that evangelization is everybody’s responsibility is why I do it,” she said. “Making these kids see that they have potential could save a life, and if we save a life, it’s worth it.”