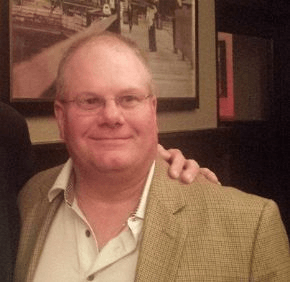 Drew Forrester
By Paul McMullen
pmcmullen@CatholicReview.org
Twitter: @ReviewMcMullen
Drew Forrester is taking 40 baseball fans to watch the Orioles play at Yankee Stadium July 22 and 23, fulfilling the dreams of those wanting to see one of the world’s most famous sporting edifices, the new version of “The House That Ruth Built.”
Last April, Forrester organized a same-day round-trip from BWI to Augusta National Golf Club in Georgia, to take in Tuesday practice rounds at the Masters.
“A lot of people look at the Masters like a bucket list item,” Forrester said. “I liken going to Augusta as a pilgrimage.”
Now Forrester is involved in leading an actual religious pilgrimage.
He has been an executive of an indoor soccer franchise, sports radio talk show host and blogger, and coach of the golf teams at John Carroll and Calvert Hall. Now Forrester is entrusted with getting hundreds from the Archdiocese of Baltimore to Philadelphia Sept. 27, for the only public Mass Pope Francis will celebrate on his first visit to the U.S.
The one-day pilgrimage is sponsored by the Archdiocese of Baltimore and Catholic Review Media, publisher of the Catholic Review and CatholicReview.org.
Experiencing the spirit of the pope is more realistic than glimpsing the Holy Father, as crowd estimates range from 750,000 to 1 million. Centered along the Benjamin Franklin Parkway, the day will challenge the staying power of pilgrims and the logistical skills of organizers.
Local pilgrims have the option of taking, at a premium, the Amtrak train from Baltimore Penn Station to 30th Street Station in Philadelphia, or boarding busses in Baltimore, Frederick or Davidsonville, ground transportation arranged by Forrester – not to mention the drawstring tote bags, bottled water, commemorative hats and rosaries to be distributed under his direction.
“We were impressed with Drew’s experience in dealing with bus companies and logistics,” said Christopher Gunty, editor/associate publisher of Catholic Review Media. “He suggested things like having physical trainers along to help with sunburn and foot blisters folks might get from walking so much. He’s a pleasure to work with.”
A Glen Burnie native, Forrester became familiar to local soccer fans from 1981 to 1998, when he helped the Baltimore Blast become one of the nation’s more stable indoor soccer franchises. He began as an assistant, and rose to general manager.
“When I began, I was the guy who would go across the street to get pizza,” Forrester joked about a bare-bones operation. “When I was general manager, I was still that guy.”
Forrester started his own golf company, and became Calvert Hall’s coach in 2013, when the Cardinals won the Maryland Interscholastic Athletic Association A Conference championship. From 2002 until August 2014, he was among the on-air talent at WNST-AM, a sports talk station.
Having been on countless busses and jets to out-of-town games, Forrester began organizing his own tours, ranging from fairly routine outings to University of Maryland events in College Park to last April’s visit to the Masters.
That involved a 5:30 a.m. flight from BWI to Charlotte, ground transportation to Augusta National, and a reversal of the legs – all in the same day.
“We were on the grounds at Augusta National by 9 a.m., and back at BWI around 11,” said Forrester, himself a scratch golfer.
Forrester encouraged his 24 patrons to set out on foot and see as much of the historic course as possible. Like the pilgrims he will lead to Philadelphia for the papal Mass, Forrester is gearing up for a similar hike.
“When I first met Chris (Gunty), I was excited about this opportunity,” Forrester said. “It is very neat, to be involved in taking people to what, for many, will be a once-in-a-lifetime event.”
Forrester, 52, and his wife, Joanne, are parishioners of Immaculate Heart of Mary in Baynesville, where their children, Ethan and Lucy, are entering third grade and kindergarten, respectively, in the parish school.
Also see:
The Catholic Review organizes a pilgrimage to the Papal Mass in Philadelphia
Lessons from South America: How to greet and understand Pope Francis
Pope says he’ll read critiques of his economic thought before U.S. trip
PrevNext