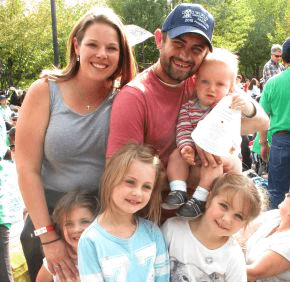 PHILADELPHIA – Perched atop her mother’s shoulders, 7-year-old Abigail Gould squealed with delight when she spotted Pope Francis in his white popemobile slowly encircling hundreds of thousands of cheering people gathered along Benjamin Franklin Parkway at the World Festival of Families in Philadelphia Sept. 26.

“I see him!” the youngster shouted as she pointed in the pontiff’s direction. “I see him clearly!”

When Pope Francis neared the stage, Abigail hopped on her father’s shoulders and took photos – excitedly showing off the images to her parents and three younger siblings.

“Papa!” Abigail shouted, swiping a finger across the screen to flip through snapshots of the smiling leader of more than one billion Catholics. “Papa!”

Members of the Gould family look at photos 7-year-old Abigail Gould took of the pope during his Sept. 26 appearance at the Festival of Families in Philadelphia. (George P. Matysek Jr./CR Staff)

For Craig and Katie Gould, parishioners of Our Lady of Grace in Parkton, the special moment with their children was the culmination of more than five hours waiting to encounter the Holy Father. They brought their children – Abigail; Bella, 6; Sophia, 3 and Kolbe, 11 months – to Philadelphia for what they described as a “once-in-a-lifetime opportunity.”

“I think they will get a better understanding of how important the pope is,” said Craig Gould, director of youth and young adult ministry for the Archdiocese of Baltimore, “but even more important than that is to see the bigger church.”

Katie Gould said Pope Francis is special because he is “meeting the average person where they’re at.”

“He’s using language and actions that are familiar,” she said. “He’s not making faith complicated.”

The pope’s down-to-earth simplicity was on full display at the World Festival of Families, which came on the heels of the four-day World Meeting of Families.

Following personal faith testimonies from a variety of Catholics from around the world and singing performances by Aretha Franklin and Andrea Bocelli, the pope spoke extemporaneously about the importance of the family.

“You know what (God) likes most?” the pope asked in Spanish that was translated by a priest. “To knock on the doors of families and to find the families who love each other, families who bring up their children to grow and help move forward to create, develop a society of truth, goodness and beauty.”

The pope joked that some may say he only speaks in that way because he is unmarried.

“Families have difficulties,” he said. “Families – we quarrel, sometimes plates can fly, and children bring headaches. I won’t speak about mothers-in-law.”

But families always have light, he said, because of the love of God.

Laura Meyd, a parishioner of St. Casimir in Canton, found the pope’s words “very encouraging and supportive.” The most memorable part of the evening was seeing the pope’s animated expression as he spoke and reacted to the crowd, she said.

“He was very much like a gentle grandfather,” she said, “imparting his wisdom with love.”

Pope Francis waves to crowds along Benjamin Franklin Parkway as he arrives for the Festival of Families for the World Meeting of Families in Philadelphia Sept. 26. (CNS photo/Matt Rourke, pool)

Meyd, who stood approximately 12 feet from the pope when he passed along the parade route, was impressed that he emphasized how essential it is to care for children and the elderly – “those who could be overlooked as less important members of the family,” Meyd said.

Earlier in the day, the throngs of people standing under a hot sun at the festival watched large video screens that broadcast the pope’s speech at nearby Independence Mall. The pope highlighted the importance of welcoming immigrants and protecting religious freedom.

At the end of the pope’s talk, some in the festival crowd pointed skyward at a rainbow that briefly appeared. Julie St. Croix, coordinator of pastoral leadership formation for the Archdiocese of Baltimore, was among them.

St. Croix expressed admiration for a man she described as “inspiring.”

Members of the crowd at the Festival of Families along Benjamin Franklin Parkway in Philadelphia point to a rainbow that appeared after the pope finished his speech at Independence Mall. The crowd at the festival watched the speech on large video screens. (George P. Matysek Jr./CR Staff)

“You see how he affects people,” St. Croix said. “Just to be close to him is just so inspiring. It’s so wonderful to be a part of that.”

Although security was tight and the crowd was slow-moving, she said, there seemed to be little impatience among festival-goers.

“You get a sense of goodwill,” St. Croix said. “People are in good spirits. They understand we are all here for the same reason.”

“There’s a guy coming up,” Gaffigan deadpanned about the pope. “78 years old, used to be a bouncer.”

Bringing four children to a marathon event was not without obstacles for the Gould family.

To make it easier to navigate the dense crowd, Craig Gould removed a wheel from a stroller that jutted out about a foot and a half. The whole family  had to go through security at a checkpoint, unpacking food and other items from strollers and then repacking it once everyone made it through.

“We can only tell them so much,” he said, as his youngest child waved a fan emblazoned with the likeness of Pope Francis.  “To bring them here and show them the bigger church  is a great gift for them.”