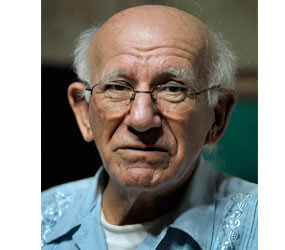 SANTA ROSA DE COPAN, Honduras – An 83-year-old Honduran priest has returned from exile to help the Central American nation face its past.

A member of an alternative truth commission established by human rights groups, Father Fausto Milla fled Honduras July 8 after a series of threats and other acts of intimidation against him and his assistant.

For the more than two months he lived in neighboring Nicaragua, Father Milla said, he missed his homeland. The priest suffers from chronic back problems and started using a cane while in Nicaragua. He returned home Sept. 18 and said that, within four days, he quit using the cane and began walking normally.

He had wanted to keep his return quiet, hoping to continue his work without attracting attention, but it’s hard to keep his presence a secret.

“Even the dogs on the street recognize me and greet me,” said Father Milla, who lives in Santa Rosa de Copan, a regional capital in the northwest. He helps celebrate Mass at a local parish and runs a store that sells natural herbs for healing.

Father Milla is no stranger to controversy. In 1980, scores of Salvadoran refugees were massacred at the Sumpul River along the Salvadoran-Honduran border in a combined operation of the two countries’ militaries. Father Milla’s parish was nearby, and he widely condemned the massacre and participated in an international tribunal to investigate the crime. In response, he was threatened repeatedly and finally kidnapped in 1981. Following an international outcry, he was released after five days. Later that year, he was forced into exile for four years, allowed to return to his parish only after lengthy negotiations between the Honduran military and his bishop.

Now, Father Milla wants to know the truth about what happened before and after the 2009 military coup that overthrew Honduran President Manuel Zelaya.

In May 2010, international pressure led the Honduran government to create a Truth and Reconciliation Commission that includes Honduran and foreign members. Yet many Hondurans doubted that such an official commission would produce anything critical of the coup plotters and, with violence increasing across the country, human rights groups created an alternative commission that June. They called it the “True Commission.”

Father Milla is one of two Hondurans on the alternative commission, which is chaired by Maryknoll Sister Elsie Monge, an Ecuadorean who serves as president of that country’s Ecumenical Commission on Human Rights.

“The official commission was created by the delinquents who carried out the coup. If I kill you but also function as judge in my trial, my verdict isn’t going to be legitimate,” Father Milla told Catholic News Service.

“The official commission’s creation was part of the clown act in the circus, something to distract the attention of the people from the growing violence around them. It’s entertainment, like football,” he said.

“We were surprised, first of all, because they recognized that what happened was indeed a coup d’etat. The coup plotters had worked hard to convince the world that it was a legitimate change of presidents. And now even (current Honduran President Porfirio) Lobo has recognized that it was a coup,” Father Milla said.

“They pointed out that the (post-coup) government of Roberto Micheletti was illegal, which is a serious charge. And they pointed out a variety of crimes that need to be processed, but that won’t happen because there’s complete impunity here,” he said.

Since the 2009 coup, the security situation in Honduras has deteriorated dramatically. Demonstrators protesting what they consider to be an illegitimate government have been beaten and killed. Journalists asking hard questions about government corruption or involvement in drug trafficking have been frequently threatened; according to the New York-based Committee to Protect Journalists, 12 Honduran journalists have been murdered since March 2010. And landless peasants seeking rich farmland they claim is rightfully theirs under the country’s agrarian reform laws have been assassinated and had several of their settlements burned in the fertile Aguan Valley.

Thelma Mejia, an independent journalist and political analyst in Tegucigalpa, said the official commission’s report is a good contribution to resolving the country’s many problems – if anyone would pay attention.

“The report is well-written and very professional. It says a lot about where the country should be headed. But there was no reaction to it. Its recommendations, such as the creation of a constitutional court, are being ignored,” Mejia said.

The alternative commission’s mandate is broader in scope, but several obstacles have slowed its work. The commission’s requests for U.S. records under the Freedom of Information Act, for example, have been stymied by U.S. officials.

“The Department of Defense can’t seem to find any records for the week before or the week after the coup,” said Tom Loudon, executive secretary of the True Commission.

Loudon, a former representative for the American Friends Service Committee in Central America, said the increasing violence in the Aguan Valley stems directly from the policies of the post-coup government.

“Zelaya was beginning a process to address some of the land conflicts and move toward significant land reform in that area, and so people felt hopeful that the poor who had lived there for years would finally be able to get titles. But that came to an abrupt stop when the coup happened. And then the evictions started. The evictions are the gasoline fueling the violence there,” Loudon said.

Father Milla said that, instead of ordering the police to stop the evictions, Lobo has ordered officers to put on a friendlier face.