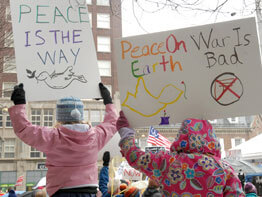 WASHINGTON – May 3 marked the 25th anniversary of the U.S. bishops’ pastoral letter on peace, “The Challenge of Peace: God’s Promise and Our Response.” In contrast to the highly public process that led to its adoption, the document’s silver anniversary passed with hardly any notice.

But that doesn’t mean the bishops’ core messages – challenging the world’s nuclear powers to rid their arsenals of nuclear weapons and discussing the importance of peacemaking in everyone’s life – has been lost, according to some of the country’s leading peace advocates.

“It’s a different time. It’s a different world. But the principles are timeless,” John Carr, executive director of the Department of Justice, Peace and Human Development at the U.S. Conference of Catholic Bishops, told Catholic News Service.

Written during the Cold War as President Ronald Reagan was proposing a new generation of high-tech weapons to secure U.S. military supremacy, the pastoral letter offered world leaders a moral vision on ending the arms race and working toward nuclear disarmament. The document made clear that possessing nuclear weapons was immoral but offered the notion of conditional acceptance only if such weapons were being held to deter a nuclear attack as long as the eventual goal was disarmament.

In addition, the bishops supported conscientious objection for individuals opposed to carrying arms. They also urged people of faith to turn to prayer, penance and nonviolence to bring peace to family, work and social relationships.

“Our intentions were to change people’s minds and hearts and attitudes and that only happens in a very deep way through prayer,” said retired Auxiliary Bishop Thomas J. Gumbleton of Detroit. He was one of five prelates on a committee chaired by the late Cardinal Joseph L. Bernardin of Chicago who wrote the letter.

A sixth partner in the effort was Father J. Bryan Hehir, who today is secretary for health and human services in the Boston Archdiocese. He headed the U.S. bishops’ Office of International Justice and Peace at the time. He could not be reached for comment.

The only other committee member alive today, retired Bishop Daniel P. Reilly of Worcester, Mass., said the authors rooted the document in the tenets of the Catholic faith. A key underlying message, he explained, was respect for the other, which can be found especially in family and community.

“We have to set up human relationships in such a way that we can try to live in peace,” he said.

While “The Challenge of Peace” has hardly influenced world leaders to eliminate nuclear stockpiles, Bishop Gumbleton said the document has as much to say about today’s “global war on terror” as it did on the morality of launching a nuclear war in 1983.

“I’m convinced we’re in a more dangerous situation now than we were even then,” Bishop Gumbleton told CNS.

Unfortunately, Bishop Gumbleton and several other peace advocates said, the pastoral letter is rarely cited or discussed today, having largely been relegated to bookshelves and library stacks.

“It hasn’t been a part of peoples’ consciences as we had intended it to be,” he said.

Despite its reduced profile, the document legitimized the Catholic peace movement, which, until the bishops spoke, largely had been relegated to the church’s margins. Organizations such as Pax Christi USA, which had been seeking nuclear disarmament and stressing the practice of nonviolence for years, found wider acceptance as their message was being embraced by the bishops.

Over the years, the concept of peacemaking in everyday life has been integrated in peace studies programs at colleges and universities and the teaching of conflict resolution skills and nonviolence to students in Catholic schools, explained Franciscan Sister Marie Lucey, associate director for social mission at the Leadership Conference of Women Religious in Silver Spring, Md.

“I think the bishops addressing the nonviolent position was important at that time and is still important today,” said Sister Marie, who represents the leadership conference at Faithful Security, a national religious partnership on the dangers of nuclear weapons. “That’s what we strive for.”