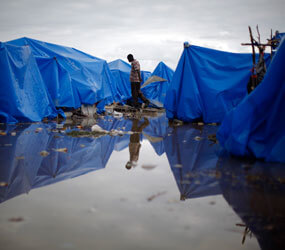 WASHINGTON – With the rainy season on the doorstep in Haiti, Isaac Boyd, an emergency shelter expert for Catholic Relief Services, and a coalition of relief agencies from around the world are trying to tackle the impossible.

Their focus is on getting the hundreds of thousands of people who remain homeless after the Jan. 12 earthquake into better housing, even if it is nothing more than a sturdy tent on safe ground.

The rainy season peaks in May, but sporadic drenching rains already are occurring, turning many of the temporary tent camps around Port-au-Prince, the Haitian capital, into muddy quagmires.

Boyd and some of the world’s leading emergency shelter experts fear the flimsy shelters that people now call home will be inundated by the soon-to-come daily downpours, compounding an already taxing humanitarian crisis.

So the experts are scrambling to identify alternatives. The situation is worsened because the devastation was so widespread in the capital region, leaving few safe structures for people to occupy.

“The push is to be able to give people safer options than where they are living now,” Boyd said in a telephone interview with Catholic News Service from Port-au-Prince. “The main point is either to get people off some pretty unsightly sites or at least slim down the population in these camps significantly.”

Accustomed to improvising, Haitians in the camps have salvaged whatever they could from collapsed homes and destroyed businesses: cushions, pillows, sheets, blankets, rope and sometimes a few pieces of wood. The more fortunate received an emergency shelter kit, bought plastic tarps or perhaps obtained a small nylon or canvas tent. None of those items were meant to be permanent, however.

Boyd’s primary concern is the 35,000 people on the golf course at the Petionville Club. The tent city sprouted within hours of the earthquake and quickly blossomed into a town of its own with businesses operating and a quasi-government council. The U.S. Army continues to maintain security at the site while CRS oversees aid and food distribution.

“We’ve got to find a plan B for Petionville pretty darn quick,” he said.

Petionville Club is just one site that concerns shelter experts. While the tent city at the club is the largest in the capital region, more than 400 similar camps of various sizes have sprouted in devastated neighborhoods.

Some are in city parks and others are on parking lots and open land. None are adequate for long-term occupation. Except for a few hundred portable toilets that were delivered to some of the camps, there are no sanitation facilities. Very few have access to clean water.

Much of the emphasis is on 21 sites with at least 5,000 people each. Seven of those sites – including the Petionville Club – are in zones prone to flooding and mudslides, and relief workers are rushing to find alternatives for residents.

Boyd said one option includes the relocation of people into safe structures in Port-au-Prince. Teams of engineers from around the world are assessing about 2,000 buildings a day to determine which are safe, which can be repaired and which must be demolished.

“Once houses are deemed habitable, we’re telling the people that they can go ahead and move back,” Boyd said. Plans call for offering additional assistance to people who return home.

A second alternative calls for moving people in with family and friends outside of the city. Agencies would provide assistance to host families as well as to the people temporarily relocating.

A longer-term option involves moving people into temporary shelters in planned settlements around the capital. Boyd said several plots of land have been identified for settlements, but details remain to be finalized with landowners.

The shelter issue was one of several topics on the agenda during the March 31 gathering of donor nations at the United Nations. At the meeting, international representatives, along with Haitian political leaders, began setting a course to rebuild the country.

For people remaining in camps, aid workers also are focused on concerns they call WASH – water, sanitation and hygiene.

Dennis Warner, senior technical adviser on water and sanitation issues for CRS, said the impending rains will create runoff that will push human waste into the walkways in the camps and perhaps even into the makeshift tents, creating the potential for a major outbreak of disease.

“It’s an enormous problem. We can’t solve it all at once. We’re more or less chipping away at the problem,” Warner told CRS from his northern Virginia home in late March prior to returning to the impoverished nation.

Jesuit Brother Jim Boynton, regional director of the Jesuit-run Faith and Joy community-based school system in Haiti, said doctors are reporting a variety of water-borne diseases and illnesses caused by a lack of sanitation.

“I have no idea what’s going to happen (when the rains come),” he told CNS by telephone from the Cazeau neighborhood of Port-au-Prince. “Diseases are already starting and they’re going to continue.”

Working in cooperation with Jesuit Refugee Service, teachers in the Faith and Joy network have started informal classes for children under tarps donated by the U.S. Agency for International Development. The effort has included education on sanitation and hygiene, he said.

Compounding the situation is the constant need to clear debris from drainage canals that normally carry runoff from rain. With few other options, residents dump trash and debris from the earthquake into the canals. Warner said that unless the debris is cleared, rainwater will back up and cause serious flooding.

“In my view, it tends to be a very frustrating process because we’ll clean a canal and a week later we’ll find the canal filled up again,” Warner said.