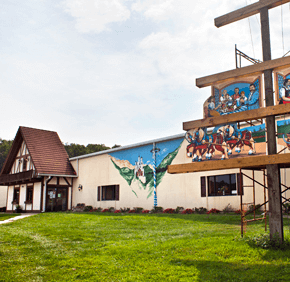 By Maria Wiering
mwiering@catholicreview.org
Twitter: @ReviewWiering
JESSUP – St. Lawrence Martyr parishioners have talked about expanding their tiny church for two decades, but it took an April 2012 visit from the Maryland State Highway Administration to convince them to act. The church is at the junction of I-295 and Route 175, which is widening from two to four lanes in front of the church, cutting off its access to the church.
The news compelled the parish’s pastor, Trinitarian Father Vincent Scocco, and other parish leaders to examine options for the parish’s future.
St. Lawrence announced Aug. 20 in a parish meeting that it plans to build a new church and parish center directly across I-295 on property known as Blob’s Park, currently home to a Bavarian beer garden and dance hall that claims to have hosted America’s first Oktoberfest.
“The reaction has been very positive,” Father Scocco said. “Parishioners have understood the need for expansion. The vast majority seem to be supportive.”
The widening of Route 175 is a consequence of demographic projections, the larger reason St. Lawrence is expanding. Its area of Anne Arundel and Howard counties is expected to undergo substantial residential growth in the coming decades due to Base Realignment and Closure, or BRAC, and the 485-acre National Business Park planned in Annapolis Junction, drawing new employees to Fort Meade and nearby government agencies and defense contractors.
“This whole area has had a spurt in the last two to three years. It’s exciting to see,” said Thomas Little, pastoral associate to Bishop Mitchell T. Rozanski, vicar of the Seton Vicariate, which includes Anne Arundel and Howard counties.
Little serves as a liaison between the parish and the Archdiocese of Baltimore.
“Except for Frederick, it’s probably the one spot (in the archdiocese) where we’re seeing an enormous growth of homes as well as business opportunities,” he said. “We want to create a space where the community can come together to do the various services … that can be based somewhere that is realistic for the number of folks who are part of it.”
Father Scocco said developers anticipate the area to grow by 1,000 homes per year for the next decade. More than 4,000 residential units are recently completed, in progress, or planned within a three-and-a-half-mile radius of the parish, he said.
Anticipating St. Lawrence’s move, the archdiocese purchased 29 acres of Blob’s Park in two parcels in December 2012 and January 2013 for $6 million. The archdiocese plans to transfer ownership of the land to St. Lawrence in early 2014; the parish is expected to pay back the cost of the land after construction is paid off. Construction is expected to begin within two years with an estimated cost of $5 million to 6 million.
Longtime parishioner Ray Tansill, 74, was one of about 100 people who attended St. Lawrence’s parish meeting Aug. 20.
“I think it’s moving along reasonably well,” he said of the planning process.
Some voiced concerns that membership growth could diminish the parish’s welcoming feel.
Chris Dretsch, 51, parish council president and a planning committee member, said he initially had similar reservations about building a new church, but now compares the expansion to growing a family.
“My concerns were all selfish,” he said. “I didn’t want to share our warmth, but that was totally wrong thinking.”
Ashley Hendrickson, 26, said she is looking forward to the new church.
“I think having something new and shiny is going to bring people,” said Hendrickson, who has attended St. Lawrence for 18 months. “It may not bring the older generation, but it’s certainly going to bring the younger generation.”
St. Lawrence was completed in 1868. The single-aisle, red brick church seats 120. Six Masses are held there each weekend to accommodate the 450-family parish. The Trinitarians have served the parish for about 30 years, but have ministered in nearby prisons since the late 1960s, Father Scocco said.
The parish intends to maintain its historic church and the cemetery behind it, while selling more than six acres of property, including its current parish center, to the Elm Street Group, a housing developer building on adjacent land. The historic church will potentially be used for small weddings, funerals, baptisms and eucharistic adoration.
Father Scocco, who oversaw church-building efforts at a parish in Victoria, Texas, hopes that St. Lawrence’s two churches will serve as anchors for the surrounding housing developments.
“God needs to be at the heart of any community,” he said.
Father Scocco roots the parish’s expansion in the new evangelization called for by recent popes, including Pope Francis, and Archbishop William E. Lori, and is exploring innovative ways to reach the area’s new residents.
“So much of what is happening in our parish is a happy confluence of events,” he said. “The call to evangelize will be enabled by the new church, and, as we successfully evangelize, we will grow the parish membership.”
See also:
Buckeystown parish to break ground on new church
Our Lady, Queen of Peace parishioner finds deeper meaning with Knights
PrevNext