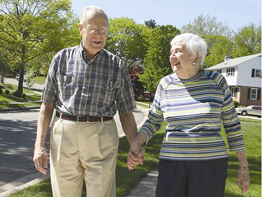 Glyndon Bailey was just 20 years old and had never shot a gun in his life when he was drafted by the U.S. Army for World War II in April of 1943.

Although the lanky non-commissioned officer said the Army taught him “pretty fast” how to shoot an M1903 bolt-action Springfield Rifle, the Catonsville native started out in an administrative role at the Fort Meade reception center.

It was during this time the 1940 Mount St. Joseph High School, Irvington, graduate was able to secure a weekend pass so he could marry Jeanne Bailey, his wife of 64 years, at St. Mark, Catonsville.

Although the couple was able to enjoy a horse-drawn carriage ride from a restaurant to a hotel, the wedding party was mainly composed of women, since most men were in the military.

“Back then everybody went in (the war) and uniforms were everywhere,” recalled Mrs. Bailey, who gave birth to the couple’s son July 6, 1944.

“Everybody seemed to have a positive attitude in the country, not like today where some 70 percent are against the war,” agreed Mr. Bailey. “One hundred percent of the people for the most part were for the war since they usually had a relative or somebody involved.”

Mr. Bailey, who worked as a typist for the B&O Railroad at Camden Station prior to entering the war, was soon assigned to Aberdeen Proving Ground for ordnance training.
After completing field training in Churchville, Mr. Bailey began running convoys between APG and Camp Pickett in Virginia as a member of D Company.

Because he only made $50 a month, less the cost of insurance, Mr. Bailey chuckled about the time he made it all the way from Camp Pickett to Catonsville by hitching rides and even walking a four to five mile portion of his trip.

“I made it all the way home with a penny in my pocket,” said Mr. Bailey, now 84.
Having served successfully in his role, Mr. Bailey was soon made acting corporal.

While the Immaculate Conception, Towson, parishioner was fortunate enough to serve on the home front, his younger brother, Albert J. Bailey of Lansdowne, served overseas in England.

Mr. Bailey, who also has a daughter with whom the Baileys live, said he was slightly worried when he was first drafted.

“The war was going on and people were getting killed,” said the longtime volunteer with the Catholic Campaign for Human Development. “Just like if you were going to Iraq today, I think you’d be a little nervous.”

However, the war had its positive aspects too.

“I gained 20 years experience in three years,” said Mr. Bailey, who served until March 22, 1946. “In other words, I’m 20 years old and I’m in charge of a group of men. As a civilian, I’m sure I wouldn’t have progressed that fast.”
He said what he learned helped him later in life with his job in the railroad, from which he retired in 1980.

“During the war, you do a lot of praying,” said Mr. Bailey, noting that the men set up an altar at Camp Pickett and celebrated Mass.