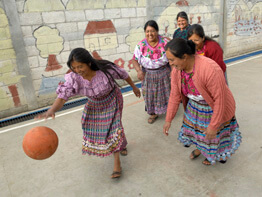 El BANANAL, Argentina – Church workers ministering to Argentine indigenous communities have been watching the Latin American and Caribbean bishops’ meeting in Brazil with bated breath, wondering whether Latin American bishops will change their methods in evangelizing the Gospel to native peoples.

“We are waiting and watching with anxiety, given that before Benedict was pope he fought against indigenous theology and liberation theology,” said German Bournissen, coordinator of the Argentine bishops’ National Team for Aboriginal Ministries, know by its Spanish acronym ENDEPA.

“There are lots of rumors that the pope wants to close the space that’s been opened up in the dialogue about indigenous ministry and theology,” Bournissen told Catholic News Service. “But some of our bishops are very clear about this, and there will be a struggle.

“We hope the bishops’ conferences can lift up their voices and be heard,” he said.

The rumors developed from Pope Benedict XVI’s speech inaugurating the May 13-31 Fifth General Conference of the Bishops of Latin America and the Caribbean in which he said the faith “has serious challenges to address, because the harmonious development of society and the Catholic identity of (the region’s) peoples are in jeopardy.”

The pope said the evangelization of the Americas was not the “imposition of a foreign culture,” and any attempt to retrieve pre-Columbus indigenous religions would be “a step backward” for Latin Americans.

This reference by the pope to pre-Columbus religions raised questions among some observers. While speaking positively of the synthesis between indigenous traditions and Christianity that led to the popular religious devotions found throughout Latin America, the pontiff warned against “the utopia of going back to breathe life into the pre-Columbus religions, separating them from Christ and from the universal church.”

Such talk worried Silvia Torres, a lay missioner who represents ENDEPA in El Bananal, a dusty village where several dozen landless indigenous Guarani families eke out a living by working when they can on neighboring plantations and occasionally receiving government subsidies.

“We’re living in a difficult moment in the church, with many fearing a return to attitudes of the past toward the indigenous,” she said.

“The bishops have a very progressive approach to indigenous ministry, but at this moment we’re on hold, and people are waiting to see what happens in Brazil,” she said. “The bishops of Latin America understand the need for this work, because they live this reality every day. We just hope they can understand it in the Vatican.”

Torres has worked in El Bananal for 15 years, living in a small room off the threadbare colonial-era chapel perched between a river and a large agricultural plantation reeking of pesticides. Her neighbors are among the poorest citizens in one of Argentina’s poorest regions, many of them having worked until the last decade as slaves on feudal-like banana and sugar plantations.

“Our task is to respect their culture, help them struggle for their rights, and at a level of faith to simply share Jesus Christ,” Torres said.

“Our ministry revolves around getting the people to organize to better their conditions of life amid great marginalization and terrible poverty,” Torres said. “The society around them puts them down, so we try to affirm their identity, help them feel valuable as children of God who have a culture that must be respected.”

A popular educator, Torres warned that growing unemployment, provoked by the mechanization of farm chores, and the steady encroachment on indigenous land by cattle ranchers have contributed to an increase in suicides among young Guarani men.

“Their desperation is growing. They don’t have land any longer. So what can they do? They’re looking for how to be at peace, but at times the only peace they see is in death,” she said.

Torres noted that recent government programs to aid the poor have helped keep people from starving to death but that government officials are not investing in employment or production.

“They’re only providing small subsidies that are just a palliative for the poor. The government is encouraging a form of paternalism, responding only to complaints and not creating genuine development,” Torres told CNS.
Torres explained that the Guaranis’ lifestyle poses a challenge for those who come with Western ideas of economic development.

“The Guarani believe in taking just what’s necessary to live. They don’t seek to accumulate, because they’re content in their relationship with the spiritual. They are more Catholic than the Catholics,” she said. “For them God is the force of unity expressed in harmony with nature.”

“They take what they need to survive, and they’ll store a little bit of corn to eat” later, she said, “but they’re not interested in a bank account.”
Torres said others can learn a lot from their culture.

“You won’t find abandoned Guarani kids. A woman here died and I wanted to adopt out her kids to a family in the city. But the community refused, and the community has taken care of them,” she said, noting that the same care is provided for the elderly.