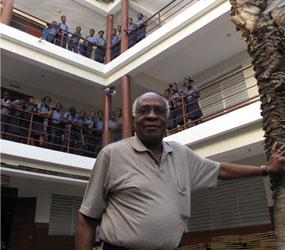 ST. MARC, Haiti – It is well after hours for the students of The Good Samaritans School, but Dieula, one of its bright 13-year-olds, is in the home of its founder, using the evening to polish a foreign tongue that will supplement her native Creole.

Her patron nods, then personalizes those aspirations.

Deacon Rodrigue Mortel, the director of the Missions Office for the Archdiocese of Baltimore, is an authority on defying perceived limits on one’s potential.

Dieula was rescued by Deacon Mortel and his network of friends from a nearby slum – one of the worst this side of the Atlantic – nine years ago, when the force of his will and foundation seed money opened The Good Samaritans School in this town some 50 miles north of the Haitian capital of Port-au-Prince.

That was in 2001. A decade earlier, there was one telephone to serve St. Marc’s 50,000 residents. It remains without reliable postal service.

In the 1950s, when Deacon Mortel escaped its streets and began forging a success story that would earn him the Horatio Alger Award, things were much bleaker.

Then and now, education is the key.

On this April trip to his hometown, Mortel is baptizing children and helping the principal of The Good Samaritans School solve logistical issues.

Dieula and the other rising ninth-graders who were the school’s first students bide their time in that overcrowded elementary as Mortel pushes construction of a nearby high school.

He prods builders, teachers, students and benefactors to do more. Mortel, 76 but showing no sign of slowing down, supports the claim that, when diligence is added to faith, all things are possible.

Mortel picks up a rock and tosses it toward a mango tree, harvesting fruit that a few hours later, over his kitchen sink, tastes like an orange fudgesicle.

Mangoes were a subsistence food in Mortel’s bleak childhood. As he related in his 2000 autobiography, “I Am From Haiti,” the pivotal moment was his family’s eviction in October 1944.

“If I had an education,” his mother told him, “this would not have happened.”

Ten years old, Mortel vowed to get one.

As an altar boy, he considered the priesthood, but earned a spot in medical school. Alarmed at the substandard training in Port-au-Prince during the Duvalier regime, Mortel made his way to Montreal, New York City and ultimately to the Milton S. Hershey Hospital in Hershey, Pa., where he was director of its cancer center.

Inspired by the philanthropy of the hospital’s namesake and a long friendship with Cardinal William H. Keeler, who led the Diocese of Harrisburg before becoming the Archbishop of Baltimore in 1989, Mortel has made improving the prospects of children in his hometown the mission of his retirement.

A Pennsylvania resident, he is on loan to the archdiocese to lead its Propagation of the Faith offices, but was ordained a permanent deacon here, in St. Marc.

The mango trees dot a 10-acre rectangle that was purchased by the Mortel Family Foundation. It is now a construction site, where the James M. Stine College, the Haitian equivalent of a secondary school, is expected to open for the 2011-12 school year.

If funds are available, a multipurpose auditiorium/gymnasium will be added to the educational mission of the Catholic school.

“We considered selling the land and putting it (the proceeds) into an endowment for Good Samaritans,” he says, “but we find no good secondary school in St. Marc. The high school is needed, that’s where we need to go next.”

Nearly two in five in Haiti cannot read and write, the highest illiteracy rate in the Western Hemisphere.

The Stine College, named for a $1 million gift from the Philadelphia-based James M. and Margaret V. Stine Foundation, is the biggest construction project seen over the course of eight days in Haiti.

Timetables here, of course, were demolished Jan. 12, when a 7.0 magnitude earthquake in Port-au-Prince took an estimated 300,000 lives and altered policy at The Good Samaritans School.

Sewage and waste are dumped untreated into St. Marc harbor. Inside the walls of the school, there is not a piece of scrap paper to be found on any floor. Students are taught a rigorous curriculum, given two meals a day and march into class with a finger to their lips, a reminder to be silent.

Because that socialization is so vital, The Good Samaritans School accepted only kindergartners until last spring, when it absorbed 65 earthquake refugees.

They entered an environment where the educational bar is extremely high. Nine hours after first bell at 7:45 a.m., third-graders sit in the courtyard, patiently waiting to share the findings of their botany experiments.

The children are sponges, eager to soak up knowledge. Someone has to provide the water, and Mortel has proven to be quite the rainmaker.

Through the Baltimore Haiti Project he oversees, 16 parishes in the Archdiocese of Baltimore have adopted parish schools in the Diocese of Gonaives. Even before the earthquake, St. John the Evangelist in Hydes had pumped more than $500,000 toward 1,200 students in LaChapelle.

There is the gift from the Stine Foundation, a similar one from the Leo W. Rader family in Baltimore that built the third floor of The Good Samaritans School, and time, toil and brainpower donated by regular volunteers like Pat Brady, a religion teacher at Archbishop Spalding High School in Severn who spent last week in St. Marc.

Brady, 57, the retired president of FTI Litigation Consulting, has been helping Mortel’s cause since he heard him speak in 2000.

“He doesn’t understand the charisma around him,” says Brady, who sits on the board of directors of the Mortel Family Foundation. “We tell him, ‘we’re here because of you.’ He embodies the Christian way.”

Every summer since 2003, a select number of students in the archdiocese with a record of school achievement and service to the church get the honor of working a summer camp at The Good Samaritans School, where they are housed in quarters above the kitchen.

Last week eight young volunteers, including five from Notre Dame Preparatory School, assisted faculty and staff with a summer day camp for 60 fifth-graders and painted the computer lab at The Good Samaritans School.

It is directed by the Sisters of St. Joseph of Cluny. Sister Marie Bernard Jean Baptiste, the principal, speaks to the urgency of opening the secondary school.

“We have to continue,” Sister Marie says. “We can’t let them (her students) go.”

The eager English student Dieula – in French, “God is here” – reverts to a more familiar language to describe the servant of God who is making that possible. What term does she use to address Mortel?

“Mon pere (my father),” she answers.
The Baltimore Haiti Outreach Project and the Mortel Family Foundation will hold their annual Gala of Hope Nov. 6, at the Marriott Hunt Valley Inn. For more information, visit highhopesforhaiti.org or friendsofdrmortel.com.

To view a slideshow of The Good Samaritans School, Click Here.