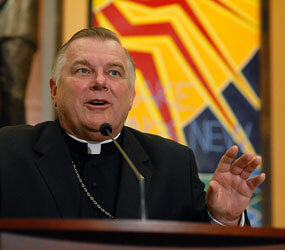 ORLANDO, Fla. – As the newly appointed archbishop of Miami, one thing is certain – Archbishop Thomas G. Wenski will immediately know where he is going since he has been there before.

When the call first came from Archbishop Pietro Sambi, apostolic nuncio to the United States, Archbishop Wenski suggested a few other names to him.

“I suggested to him other names I thought should be considered but he insisted that many thought I should be the person for this time,” he said, adding: “I did not want to say no to the pope.”

Archbishop Wenski, 59, was born in 1950 in West Palm Beach and grew up in Lake Worth. Both of his parents are deceased. His only sibling, Mary Engle, lives in Lake Worth.

“When I was a priest working in the Haitian community in Miami, my parents oftentimes came to Mass there but didn’t understand what I was saying because I preached in Creole,” Archbishop Wenski told the Florida Catholic, newspaper of the Orlando Diocese.

At the time of his appointment to Miami, he had been Orlando’s bishop since November 2004.

The archbishop studied at St. John Vianney Minor Seminary in Miami and then St. Vincent de Paul Major Seminary in Boynton Beach, earning a bachelor’s degree in philosophy and a master of divinity degree. He was ordained a priest of the Miami Archdiocese in 1976. He earned a master’s degree in sociology, with an emphasis on pastoral planning, from Fordham University in New York in the early 1990s.

Archbishop Wenski speaks English, Spanish and Creole. He was once described as “an ethnic chameleon,” for being equally at home among Haitians, Cubans and other Americans. He learned to speak Spanish – with a Cuban accent – during his seminary years.

Shortly after his ordination, however, coinciding with the beginnings of the Haitian migration to south Florida, he learned to speak Haitian Creole and spent 18 years ministering to the Haitian population as a parish priest. He became well known as a tireless advocate on their behalf.

In 1997, while serving as pastor of three Haitian missions and the archdiocesan director of Catholic Charities, he was ordained auxiliary bishop of Orlando. Just shy of six years later, he was named coadjutor bishop of Orlando and in 2004 he was appointed Orlando’s bishop.

On June 1, Archbishop Wenski will be installed in Miami.

During his tenure in Orlando, Archbishop Wenski was aggressive in working to securing a stable financial future for the nine-county diocese by establishing the “Alive in Christ” capital campaign, formulated following a yearlong diocesan synod in 2005.

“The synod enabled so many people of the diocese to get involved with the church and the visioning of where we should be as church in responding to the challenge of evangelization in the 21st century,” he said.

When it comes to the public square, Archbishop Wenski is not shy about expressing church teachings on hot-button issues such as immigration, human trafficking, pro-life concerns and care of the poor.

“There is a great freedom in proclaiming the social doctrine of the church, for in doing so I do not speak in my own name but in the name of Christ and his church,” he said. “As a bishop, it is not as if I am giving my own opinions, I simply wish to be coherent and consistent in applying what the church teaches.”

A teacher doesn’t teach by staying silent, he added.

As for his new assignment, he expects there will be challenges to face, “but the Lord tells us, Do not be afraid,” he said. He noted that the history of Miami has always been a cycle of boom and bust. He believes the current economic crisis affecting every state in the country will eventually be replaced by recovery within the next few years, if not sooner.

Reflecting on his time as shepherd of the Orlando Diocese, Archbishop Wenski expressed appreciation for the priests.

While many major projects will be unfinished when he leaves, he joked that if he knew his tenure in Orlando was coming to an end, he would have worked harder to get them all finished. He noted that as St. Paul said, “one plants and another harvests.”

“Hopefully,” the archbishop added, “what I have planted or initiated will result in stronger parishes and a stronger diocese.”