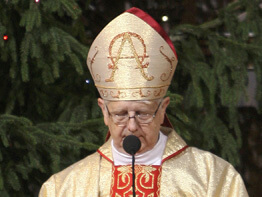 VATICAN CITY (CNS) — The resignation of Polish Archbishop Stanislaw Wielgus of Warsaw has prompted embarrassment and disappointment in the Vatican, along with a sense of relief that Pope Benedict XVI did not allow the awkward drama to continue a single day longer.

In an official statement, the Vatican praised the “humility” of Archbishop Wielgus, who resigned Jan. 7, two days after admitting he had once cooperated with the secret police of Poland’s former communist regime.

Privately, however, several Vatican officials expressed irritation that the archbishop had apparently not been fully frank about his past from the beginning. They also questioned how the Vatican’s normally exhaustive vetting process broke down in one of Eastern Europe’s most important episcopal appointments.

“When Msgr. Wielgus was nominated, we knew nothing about his collaboration with the secret police,” Cardinal Giovanni Battista Re, head of the Vatican’s Congregation for Clergy, bluntly told the Italian newspaper Corriere della Sera.

This failure was all the more surprising because the nuncio to Poland, the man who coordinated the search process, is a Pole himself — Archbishop Jozef Kowalczyk — who has been on the job since 1989 and presumably would have spotted a problem before it became a disaster.

And “disaster” is how it’s viewed inside the Vatican, for several reasons:

– Archbishop Wielgus became the highest-ranking church leader to admit that he agreed to spy for an East European communist regime, raising suspicions about the rest of the hierarchy in the eyes of the simple faithful. To many, the archbishop’s qualifier that he “never inflicted any harm on anyone” seemed disingenuous.

– The debacle was played out in public, crowned by the painfully embarrassing “installation” Mass Jan. 7 that turned into a resignation Mass. It was the first time anyone could remember that an archbishop was sent home on the day of his scheduled installation, an “emeritus” after only two days in office.

– Pope Benedict was drawn directly into the controversy. A Vatican statement Dec. 21 expressed the pope’s “full trust” in Archbishop Wielgus and “full awareness” of his past. But sources now say it appears the archbishop had not told the pope everything — that he had admitted contacts with the secret police, but not that he had agreed to collaborate in a spying effort.

By Vatican standards, the statement by its spokesman, Jesuit Father Federico Lombardi, was unusually direct: “The behavior of (Archbishop) Wielgus during the years of the communist regime in Poland seriously compromised his authority, even with the faithful.”

That’s what the pope and his aides ultimately weighed, said one source. The discussion about accepting the resignation focused on the archbishop’s authority and was not regarded as “punishment” for not telling the truth, he said.

Father Lombardi also signaled the Vatican’s serious fears that this scandal may be followed by other accusations against priests and bishops in Poland, based on spurious information and motivated more by antagonism toward the church than by a search for historical truth.

The Vatican believes the documentation about “collaborationist” priests and bishops is highly suspect, because it was put together by a communist regime that specialized in blackmail, but church experts presume there’s more to come.

“I think there’s probably a lot more out there, and for this reason it’s important to have all the facts,” said one Vatican source. He said it was hoped that the Polish Catholic Church Historical Commission, launched late last year by the Polish bishops’ conference, can examine the information and present it in a balanced way.

It was the same historical commission that helped seal Archbishop Wielgus’ fate when it disclosed Jan. 5 that substantial documents confirmed his willingness to secretly cooperate with communist security forces.

Vatican insiders acknowledged embarrassment over the affair, but said it will not necessarily reflect badly on Pope Benedict. The pope made the right decisions based on what he knew at the time, they said, and by removing the archbishop he was seen as trying to restore credibility to the church in Poland.

In choosing a replacement for Archbishop Wielgus, the sources said, the pope could go two ways: turn to another of the three candidates who were considered months ago and make a quick appointment, or take a longer pause to put a mechanism in place to ensure this doesn’t happen again.

In either case, the sources said, it is certain that the candidate will be asked to be completely forthright about any covert cooperation with Poland’s former communist government.