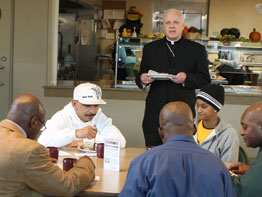 Standing beneath three bright floodlights at Our Daily Bread Employment Center in Baltimore, Archbishop Edwin F. O’Brien looked straight into a slow- rolling tele¬vision camera and made a heartfelt pitch for generosity.

“Please consider con¬tributing your gifts of time and treasure to worthy causes like our Catholic Charities’ Our Daily Bread,” said Archbishop O’Brien, placing a plate full of steaming chicken and rice atop one of two tables filled with hungry guests.

The large camera captured his every move, along with those of a team of kitchen volun¬teers who prepared food in the background.

“Come, help us make God’s love known to others through Catholic Charities’ programs in the Archdiocese of Baltimore,” the arch¬bishop said. “ Our doors and our hearts are always open.”

With that, an official from the television crew declared it a wrap and the guests filled the room with applause. It only took 10 takes for the archbishop to finish his fourth 30- sec¬ond commercial promoting the many minis¬tries of the archdiocese.

The weekly spots began airing Nov. 21, every Sunday morning on WBAL- TV. The yearlong campaign will also air spots on dif¬ferent days and times. A new ad will appear every two weeks.

Archbishop O’Brien told The Catholic Review he hopes the commercials will raise awareness about the diverse ministries of the archdiocese.

“I think viewers might be surprised to find a Roman collar on there during news time or regular programming,” Archbishop O’Brien said. “ I think they’ll be surprised and pleased to know that we have room for them to help contribute whatever gifts God gives them for the good of others.”

Two commercials have already aired, one focused on Thanksgiving Day and anoth-er on the economy. Future top-ics will likely include Cath-olic education and religious vocations. People are respond-ing “ very positively” to the commercials, Archbishop O’Brien said.

“There have been some e-mails and a good number of phone calls to the office,” he said.

Sean Caine, archdiocesan spokesman, said the commer-cials are funded through the Catholic Communications Campaign. Their goal is to help people feel better about the church and inspire viewers to enter into a deeper relationship with God. All the commercials will have evangelization as their theme, he said.

“It’s a way to reintroduce peo-ple – Catholic and non- Catholic alike – to the welcoming envi-ronment of the archdiocese, to the ministries of the church and to the archbishop,” Mr. Caine said. “ It’s another evangeliza-tion tool.”

As part of the communi-cations effort, the archdio-cese recently adopted a motto: “ Embracing the Divine With-in.” It was derived from a sim-ilar phrase used by Catholic Charities, Mr. Caine said.
Dennis M. Murphy, program manager of Our Daily Bread Employment Center, said he welcomes increased exposure for his ministry.
“It’s really a big boost to have someone like the archbishop say Our Daily Bread is impor-tant and it really does good work,” he said. “ With this kind of exposure, people respond just incredibly to help us out.”

To view the commercials visit www.archbalt.org/faith.