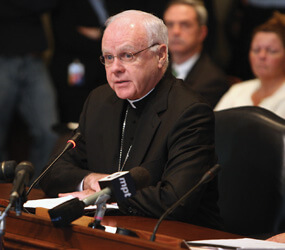 Archbishop Edwin F. O’Brien reiterated his support for the repeal of Maryland’s death penalty during a House of Delegates Judiciary Committee hearing in Annapolis March 17.

The archbishop’s testimony followed that of Gov. Martin J. O’Malley, who earlier encouraged senators to apply a seldom-used procedural maneuver to advance legislation out of a Senate committee that would have repealed the death penalty.

Amendments that would maintain the death penalty as an option based upon evidentiary standards were added to Senate Bill 279, which Archbishop O’Brien referenced in his March 17 statement during a standing room only House hearing. The bill as amended in the Senate would require videotaped or DNA evidence before the state could execute someone.

“I am here today to express our support for the full repeal of Maryland’s death penalty, as proposed by House Bill 316,” the archbishop said. “Recognizing that the Senate-passed version of this bill offers a small step toward this goal, I also want to express our support for the amended Senate Bill 279, as a measure that may at least help to prevent the execution of an innocent person.”

Archbishop O’Brien testified last year to the Maryland Committee on Capital Punishment, a task force which voted 13-9 to abolish the state’s death penalty.

The archbishop has discussed his conversion on the death penalty in the late 1990s, when, as he stated in his March 17 testimony, “Pope John Paul II … declared that ‘The dignity of human life must never be taken away, even in the case of someone who has done great evil. Modern society has the means of protecting itself, without definitively denying criminals the chance to reform.’

“This was a real moment of conversion for me, a turning point, so to speak,” Archbishop O’Brien said.

Archbishop O’Brien is the chairman of the board of the Maryland Catholic Conference. Even if the Senate-proposed compromises are approved, the MCC has vowed to continue fighting for a total repeal of the death penalty.