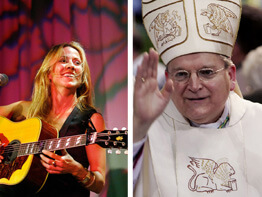 ST. LOUIS – Saying that it sent a “contradictory message” for a Catholic institution to raise funds by featuring a musician who supports abortion and embryonic stem-cell research, Archbishop Raymond L. Burke of St. Louis announced April 25 that he had withdrawn his support for an upcoming benefit for SSM Cardinal Glennon Children’s Medical Center.

Ms. Crow was scheduled to perform at the annual Bob Costas Benefit April 28 at the Fabulous Fox theater in St. Louis. Sportscaster Costas and comedian Billy Crystal also were to participate in the benefit, with tickets ranging in price from $35 to $100.

At an April 25 press conference at the archdiocesan offices, Archbishop Burke said Ms. Crow’s connection to the benefit event was “an affront to the identity and mission of the medical center, dedicated as it is to the service of life and Christ’s healing mission.”

“When there is a significant risk that others could be led to evil, as the one responsible for the spiritual and moral well-being of the faithful entrusted to my pastoral care, I am obliged in justice to act,” the archbishop added. “Only after the board of governors of the Cardinal Glennon Children’s Foundation informed me it would not address the issue did it become necessary that I carry out my pastoral responsibility to clarify the matter.”

In an interview with the St. Louis Review archdiocesan newspaper prior to the press conference, the archbishop said he also had submitted his resignation earlier in the week as chairman of the foundation’s board of governors.

The archbishop also requested that the foundation amend its bylaws to release him as a member of the board and that his name be removed from any materials promoting the benefit.

Archbishop Burke said his concern with the benefit has no association with the “goodness of the apostolate which the medical center is carrying out.” He added that the church is not condemning anyone over the matter, either.

“It grieves me very much to have to take the action, because I have such high regard for Cardinal Glennon Children’s Medical Center,” he said. “It’s not a question of my support of the children’s medical center and its apostolate.”

The archbishop said he has visited the medical center on several occasions to meet children receiving treatment. He participated in last year’s 50th anniversary celebrations, during which he “expressed my esteem for the staff … and of course my great care and concern for the children who are treated there.”

The archbishop also collaborated with the medical center last year to produce a video on the St. Louis Cord Blood Bank, which is the second-largest independent cord-blood bank in the world and sits on the medical center’s campus. The facility offers umbilical-cord blood for adult stem-cell treatments, which the church supports.

Last fall, Ms. Crow was featured in a television advertisement that supported Amendment 2, the stem-cell initiative. She also has been a public advocate of keeping abortion legal for women and continues to speak on behalf of legislation in support of abortion and embryonic stem-cell research.

“When, for economic gain, a Catholic institution associates itself with such a high-profile proponent of the destruction of innocent lives, members of the church and other people of good will have the right to be confirmed in their commitment to the Gospel of life,” Archbishop Burke said at the news conference.

He said his role as a church leader and the gravity of the situation required him to resign from the board and speak publicly on the issue.

“If I, as archbishop of St. Louis, were simply to let this pass, it would give people the impression that as long as the purpose is to raise money, you can associate with people, even feature people, who are public proponents of the killing of unborn children and embryonic human life,” the archbishop said.

“It is bad when any of the flock leads another one into confusion or leads them astray,” he added. “But it’s especially harmful when it’s the shepherd of the flock himself – either through silence or through some action that causes people to go into error.”

A Glennon foundation spokesman told Catholic News Service that there had been no requests for ticket refunds as of April 26. “There was a surge in ticket sales today,” he added, “but that was to be expected” as the event draws closer.

“We are looking forward to a great event for a great cause,” the spokesman said.