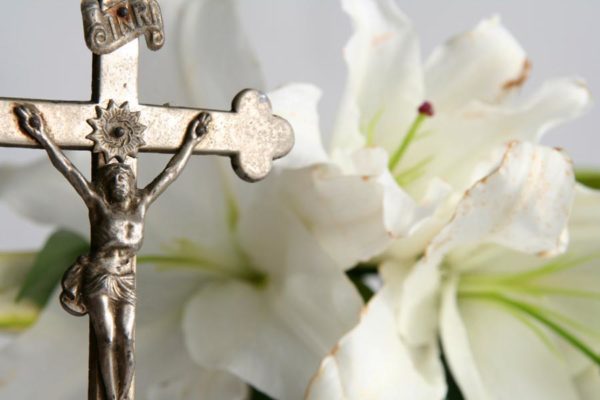 Some forty years ago, as a newly-ordained priest a former congressman and the then-current Prince George’s County Executive was a parishioner at St. Joseph’s in Landover where I was an assistant pastor. My first or second weekend was the first time that I was privileged to meet Larry and Ilona and it was the first time they were less than privileged to listen to my very first attempts at preaching. Little did either of us imagine that someday I’d be doing this!

In those days I didn’t follow politics quite as closely as I do today so it was only gradually that I realized what a varied and interesting career Larry had. In everything he did there seemed to drive, passion, and commitment – so much so that one might say he was in perpetual campaign mode. It’s not that he was perpetually running for elected office. Rather he was strenuously working for that which he believed in. He readily ‘took to the field’ of life – striving to achieve what he believed to be right and good for his family, for his county, for his state, and for his country.

As you know so well, Ilona, Larry was devoted to you and to his family – to his sons, to his daughter, Mary Teresa, already with the Lord, and to his extended family, many of whom are here today. Two years ago, I remember offering the Rosary here at St. Mary’s for your intentions, Governor, and your dear father sat in the front row, rooting for you and praying for you with great determination and intensity – he really wanted to see you well. I’m going to guess the Lord found his prayers irresistible! All of you who are members of his family know better than I ever could how much he loved you, how he looked out for you, provided for you and helped you to succeed in the campaign we call “life”.

I’m also going to guess that Larry’s education was something of a campaign. Not many others would be a full-time law student and a full-time F.B.I. agent. And in that latter role, he stood up for those he felt were victims of injustice, especially the members of the Osage Nation in Oklahoma. In the world of elected politics, he was, I think a vigorous campaigner, by all accounts a vote getter, with an ability to transcend party lines – (There must be a gene for that!) More than that, as an elected official he respected two things: his own conscience and his constituents. He was liked and respected by his colleagues of both parties and for good reason. Larry did not win all his campaigns for elected office, nor did he persuade everyone to agree with his views, but he won respect and admiration far and wide for his integrity.

Whilst conducting all the aforementioned campaigns in his life, Lawrence Hogan, Sr. was also conducting the campaign of a lifetime – the one campaign that counts the most after every race has been run and after all the votes have been counted – namely – the campaign to become holy and righteous in the sight of God, the campaign to enter not the halls of a political assembly but rather the vast assembly of saints in heaven who rejoice in God’s presence. For the conduct of this campaign, Larry took his cues from the Word of God handed on in the Church … and what did it tell him?

First, every campaign needs a patron and a platform It’s probably not a good idea for anyone to run for office or to go through life without mentors and friends to help and empower us and without a clear idea of what one stands for. In the reading from the Acts of the Apostles, Peter gives us both patron and platform. The patron for the campaign of a lifetime is the Risen Lord – God’s Son who loved us so much that he became one of us, took upon himself our frailty and sinfulness, died on the Cross and rose from the tomb. Jesus came to conduct God’s campaign to save the world and he is the one who serves not only as our mentor and friend but also serves as the platform, the basis upon which we are to live our lives. And there is no sturdier platform than this – for the love revealed by Jesus is stronger than death and more powerful than sin.

A second ingredient for a successful campaign is being a good candidate – one who is attractive, who inspires trust, who promises hope for constructive change. And we can find guidance on how to be that candidate in the Gospel for today, the Beatitudes, the heart of the Sermon on the Mount. Here Jesus is teaching us what kind of persons his followers must be. In a word, we must become like himself, like Jesus – people whose lives of goodness, integrity, compassion, and peace make a difference. When we hear words in the Gospel like “meek” or “merciful” we may think Jesus is calling us to be milquetoast – to be timid and submissive – qualities which would hardly be applicable to the Larry Hogan Sr. we knew. But that’s not what Jesus is calling us to be – he’s calling us to be people who find a way in our chosen path in life to impact the world for the better by the way we live our lives. This is how we are the salt of the earth and the light of the world. In the campaign of a lifetime, Lawrence Hogan Sr. showed himself to be a fine candidate.

There’s a third and final component to the campaign of a lifetime and it’s this: the candidate needs to have some clear idea of what victory looks like. It’s not enough to muddle along every day hoping for the best – we need to know what the struggle really is and thus how to prevail in it. We find that kind of guidance in the First Letter to the Corinthians where St. Paul teaches us not to pin our hopes only on this world. Beyond the valley of human life lies an Everest that is the ultimate destiny of the human person. The human heart has a capacity that the present world cannot fill. That capacity can only be filled by fullness of God’s love – and for that reason Larry was often at daily Mass, often a daily communicant. Because we share, body and soul, in God’s invincible love, we are empowered, even in this world, to do things we could never do by our own strength. In the end, however, the campaign of a lifetime extends beyond the boundaries of this life as “death is swallowed up in victory” – robbed of its victory, robbed of its sting. Indeed, the victory which Larry sought throughout his long and accomplished life was not only to enter the halls of government but indeed to enter the halls of heaven where the saints rejoice forever in the presence of the Triune God. Just as he campaigned for us, so let us campaign for him, not forgetting to pray for him and for the happy repose of his soul, asking God to grant him the victory that transcends every other.

Eternal rest grant unto him, O Lord, and let perpetual light shine upon him. May he rest in peace. Amen!