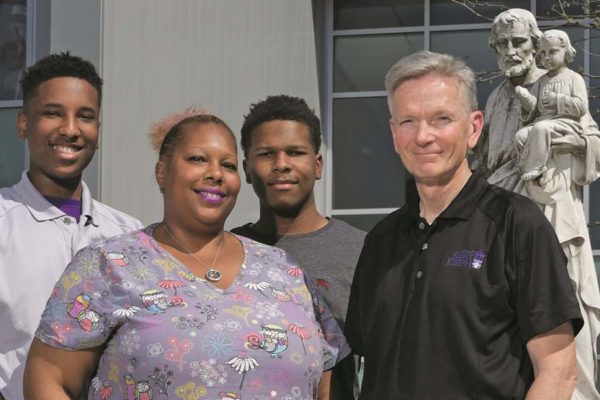 Never underestimate the power of a prom date.

Mark Bates was graduating from Mount St. Joseph High School in 1986 when he asked Tia Coles, then a junior at Seton High and an acquaintance from their days at the parish school at All Saints in Liberty Heights, to his senior formal.

For nine of the last 13 years, her work commute from their home in Prince George’s County to Baltimore has included dropping off one or two of their three sons at Mount St. Joseph.

Isiah, in the class of 2018, wants to next study at Maryland Institute College of Art. Ian, ’16, is at PG Community College, with the goal of entering Stevenson University and then law school. Jordan, ’08, is a graduate of Neumann University in Aston, Pa., and the branch manager of a cash management company.

Making a good living is important, but that’s not why Mark and Tia Bates sent their boys to Catholic schools.

“Mount St. Joseph taught me how to study, navigate life and be productive,” Mark said. “That’s a solid foundation, and when you add in the faith aspect … Tia and I wanted to send our sons to a high school that espouses the Christian values we teach in our home.” 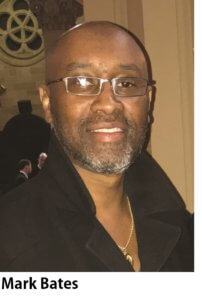 Mark is a vascular technologist with an arm of George Washington University in Washington, D.C. Tia is a radiologic technologist at Harbor General in Baltimore.

They were newlyweds when he served in the U.S. Air Force during the Gulf War – already imbued with a sense of service and attachment to their Catholic faith.

Tia attended parish schools at St. Cecilia, St. Lawrence and All Saints. Before All Saints, Mark went to St. Ambrose. Their two younger sons started their education at St. Bernardine. Her high school merged into Seton Keough High. All of those institutions are closed or about to close.

After Vandelia and James Bates, the grandparents who were raising them, informed Mark and Marlon toward the end of their freshman year that they could no longer afford the tuition, the big brother sought help from Xaverian Brother Kirby Boone, principal of Mount St. Joseph from 1980 to 1986.

“My household changed, and I had to start work to pay for tuition, $2,500 at the time,” said Mark, of circumstances that ended his Gaels’ wrestling career after one season. “I worked in the (school) library, and kept up the cafeteria. Every payday, a portion of what I had made went toward tuition.

“That was humbling, but a good lesson. Nothing is free.”

Factoring in Sunday worship at St. Bernardine in Baltimore, the family needed just six years to put more than 300,000 miles on a Pontiac G6.

“It’s definitely worth the sacrifice,” Tia said, of the opportunities she and her husband have afforded their sons.

Isiah described the bannister in their bedroom being draped with school clothes, and 20 minutes between waking up and sliding into his mother’s car.

“This is a family tradition; being the youngest, I didn’t want to end it,” he said. “I was just hoping I would get some of the teachers they (his brothers) had.”

Ken Pittman, in his 42nd year as an art teacher, taught Mark Bates and his two younger sons.

“The common thread was the respect that they had for those around them,” Pittman said of Ian and Isiah. “My guess is, that’s a reflection of the strong Bates family unit.”