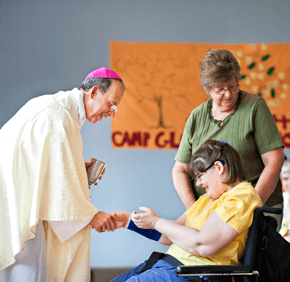 SPARKS – Arriving early before celebrating Mass and appearing relaxed, Baltimore Archbishop William E. Lori greeted nearly all 40 campers at Camp GLOW with a hug, handshake and even a fist pump.

Archbishop Lori celebrated Mass June 19 at Camp GLOW, a six-day retreat for Baltimore-area residents with special needs. The residential camp is held at the Monsignor O’Dwyer Retreat House in Sparks.

Sara Dehitta, a companion – or volunteer – remarked at how Archbishop Lori connected with the campers and said “titles don’t mean much to campers.”

“He really has an affinity for people with special needs,” said Dehitta, a parishioner of Church of the Resurrection in Ellicott City. “The campers love everyone and really seemed to connect with him.”

Archbishop Lori is no stranger to people with special needs. His older brother, Frank, has autism.

Many campers immersed in an arts and crafts project stopped what they were doing, eager to meet Archbishop Lori.

This session of Camp Glow includes daily Mass, celebrated by a different priest. Campers participated in the Mass with the archbishop, processing into the chapel, with him, giving the first and second readings and the psalm, and bringing the offertory gifts.

Archbishop Lori included the campers in his homily, asking them to share what they like about the camp.

Many of the nearly dozen campers Archbishop Lori called on told him their favorite part of camp is how much everyone loves each other.

“This is the easiest place I could ever preach because you gave the homily for me,” said Archbishop Lori, who explained to campers that Jesus “loved everybody and you do that.”

Speaking loudly and deliberately, Archbishop Lori continued to include the campers in the liturgy and invited many to share their intentions during the Prayer of the Faithful.

“Who wants to offer a prayer now?” Archbishop Lori asked.

After a half-dozen campers shared their intentions, Archbishop Lori added, “I’m such an old softie, one more.”

After Mass, Dehitta said Archbishop Lori “spoke really clearly. He knew that he would be able to converse with them.”

Bill Fleming, coordinator of the archdiocesan Office of Disabilities Ministry and director of Camp Glow, remarked after the liturgy that “it’s quite a Mass. You can’t help but be present.”

Boyle, who said Mass “was very nice” and liked “all the singing,” enjoys “everything,” about camp, including swimming, arts and crafts, watching movies and playing basketball.

“We get along with each other,” Boyle said. “I’m grateful for Bill (Fleming). He’s a good friend.”

There are 40 participants and 12 companions at this session, Fleming said.

There are two other summer sessions of the residential camp. The second session is July 15-20 in Sparks and the third session – Camp GLOW West – is Aug. 15-17 at the Hickory Environmental Education Center in the Garrett County town of Accident.

The camp is funded through the Archbishop’s Annual Appeal, parishes, Knights of Columbus councils, businesses and individuals, Fleming said. Each session costs $20,000.

Dehitta called the camp “a really great growing experience,” both for campers and companions.