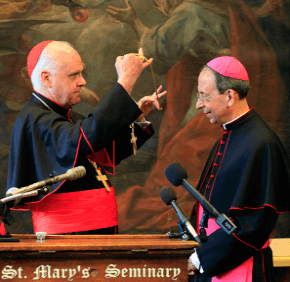 By Maria Wiering
mwiering@catholicreview.org
Archbishop William E. Lori said he felt hopeful as he prepared to take leadership of the Archdiocese of Baltimore May 16.
“I feel that this archdiocese is a great, strong, living archdiocese,” he said at press conference at St. Mary’s Seminary in Roland Park prior to the installation Mass at the Cathedral of Mary Our Queen in Homeland.
“I’m blessed to come here, happy to come here, anxious to get started,” he said. “In God’s grace, I’m hoping and praying that we will come to see the Lord’s great and mighty deeds unfold among us.”
During the press conference, Cardinal Edwin F. O’Brien presented Archbishop Lori with the pectoral cross first worn by Archbishop John Carroll, first archbishop of Baltimore, in the late 1700s.
When Archbishop Carroll wore the cross, “there was only one bishop in the country, and one such cross in the country,” Cardinal O’Brien said before placing the cross over the new archbishop’s shoulders.
“Now each archbishop (of Baltimore) has prized this and has been reminded of the great culture and the great gift that the faith has been, and the great freedom that Maryland has always enjoyed under its founder, and we will hopefully see that continue in the years ahead,” he said.
Cardinal O’Brien served as archbishop of Baltimore from 2007 until he was appointed Grand Master of the Equestrian Order of the Holy Sepulchre of Jerusalem last year.
Pope Benedict XVI named Archbishop Lori the 16th archbishop of Baltimore in March. Prior to his installation, Archbishop Lori was bishop of Bridgeport, Conn. He was ordained a priest in 1977 for the Archdiocese of Washington, D.C., and ordained an auxiliary bishop of Washington in 1994.
“What a precious legacy,” Archbishop Lori said of the cross, adding that it symbolizes the beauty and depth of the archdiocese’s legacy. “It is my hope and my prayer that with God’s grace I will be able to build upon that legacy,” he said.
As the chairman of the U.S. Conference of Catholic Bishops’ Ad Hoc Committee for Religious Liberty, Archbishop Lori has been at the forefront of the U.S. bishops’ response to the U.S. Health and Human Services mandate for employers, including most religious employers, to provide insurance for contraception, abortifacients and sterilization, drugs and procedures that contradict church teaching.
He was also a member of the U.S. bishops’ Ad Hoc Committee on Sexual Abuse, and helped to write the U.S. bishops’ Charter for the Protection of Children and Young People in Dallas in 2002. He worked to create child protection policies in Washington, D.C., and Bridgeport, where he was appointed bishop in 2001.
During the press conference, he addressed the insurance mandate and same-sex marriage, reiterating that Catholic institutions wish to serve out their missions in accord with church teachings, and that the church teaches that marriage between one man and one woman is a “bedrock institution for the common good of society.”
He also expressed his commitment to the church’s role in protecting children from abuse and offering help to abuse victims. “I can tell you that with all my heart and soul, I see this as a very important thing for the life the church, the good of society, and hopefully the healing for any broken heart,” he said.
He pointed to two challenges facing the church—evangelization and remaining a strong institution in the midst of change.
“While we have our challenges, God has also given us an abundance of resources,” he said.
PrevNext