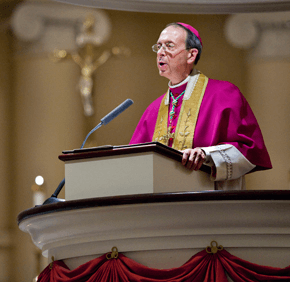 Archbishop William E. Lori delivers the homily during a Solemn Vespers at the Basilica of the National Shrine of the Assumption of the Blessed Virgin Mary on the eve his installation as the 16th archbishop of Baltimore May 15. (Tom McCarthy Jr. | CR Staff)|

Moments after praying silently at the tombs of eight of his predecessors, Archbishop William E. Lori said their legacies and the legacies of all those who “went before us in faith” put Catholics in touch with sacred tradition – a tradition “deeper, richer, more beautiful and coherent than anything any of us could conjure.”

“To be sure, the tradition is not like a box of dead things and neither is it a storehouse of ready-made answers,” said Archbishop Lori, speaking in a May 15 homily during a vespers service for women and men religious inside a packed Basilica of the National Shrine of the Assumption of the Blessed Virgin Mary in Baltimore.

One day before his installation as the 16th archbishop of Baltimore, the former leader of the Diocese of Bridgeport, Conn., compared sacred tradition to a “river of life which flows from God through Christ onto us in the Church.” It can continually refresh and renew at every stage of life, he said.

In his homily, Archbishop Lori referenced several of the former archbishops buried in the basilica’s undercroft. Special mention was made of Archbishop John Carroll, the nation’s first Catholic bishop who is buried in the nation’s first Catholic cathedral. Archbishop Lori noted that Archbishop Carroll, working with architect Benjamin Latrobe, envisioned the basilica “as a place of great beauty that would embody the Catholic tradition while reflecting the distinctiveness of the American experiment of limited government, designed to recognize and protect religious freedom.”

It was in the basilica where Archbishop Lori said the contours of the church in the United States began to take shape, including the parish system, Catholic schools, the establishment of the Baltimore Catechism, the founding of The Catholic University of America and a “spirited defense” against anti-Catholicism.

The archbishop referenced 15 portraits of his Baltimore predecessors that hang in his residence, which adjoins the basilica.

“I can well imagine myself some sleepless night tiptoeing by the imposing portraits of my predecessors on my way to the kitchen to get a glass of milk,” Archbishop Lori said.

Fifty percent of the bishops of Bridgeport have gone on to become archbishops of Baltimore, he said. Archbishop Lori also cited his 24 years as a priest of the Archdiocese of Washington – much of that time spent as a resident of the Free State.

Archbishop Lori thanked Cardinal Edwin F. O’Brien for his service to the archdiocese, provoking a standing ovation for the 15th archbishop of Baltimore. He also thanked Cardinal William H. Keeler and asked those in attendance to remember Cardinal Keeler in their prayers.

Mission Helper of the Sacred Heart Sister Maria-Luz Ortiz, the archbishop’s delegate for religious, welcomed the archbishop to Baltimore on behalf of the hundreds of women and men religious who serve in the archdiocese. During a dessert reception at the Catholic Center following the vespers service, she surveyed the large crowd before addressing the archbishop.

“It is a joy to see all of you here,” she said. “I hope this is a sign, your excellency, to know that we really are ready to continue working with you.”

In a light moment, when Sister Maria-Luz announced that Archbishop Lori was at the back of a filled auditorium, the archbishop responded, “I’m coming Sister!” as he made his way to the front of the room amid laughs and applause.

Prior to the vigil service, approximately 50 lay people held what they called a “peaceful presence” across the street from the basilica – holding signs with messages such as “Support Our Sisters” and “We love our Sisters.”

Redemptorist Father Richard Poetzel, associate pastor of Our Lady of Fatima in Baltimore, told the Catholic Review he thought it was important as a priest to be present for the vespers service.

“I wanted to welcome the archbishop as well as give thanks to Cardinal O’Brien for his work,” he said. “The archbishop is the head of the archdiocese and we are here to support him.”