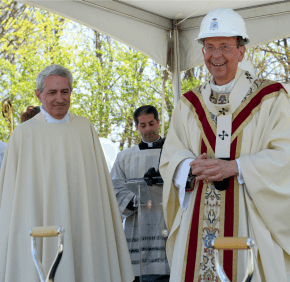 By Erik Zygmont
ezygmont@CatholicReview.org
TIMONIUM – With a shovelful of earth, the Church of the Nativity in Timonium commenced April 17 the solution of a pressing – albeit good – problem: too many parishioners, not enough space.
“We have more than doubled in the last six years, and tripled in the last 10 years,” said Ed Bradley, stewardship director.
“We attribute that growth to our focus on being ‘a church of growing disciples, who are growing disciples,’” he added, employing a Nativity catch-phrase to underscore the parish’s commitment to both evangelization and personal spiritual growth.
With construction set to begin next month, Baltimore Archbishop William E. Lori encouraged the Nativity community to remember those who first built the parish, as well as those who have served it through the years.

A color rendering of the new sanctuary at the Church of the Nativity in Timonium sits proudly among shovels being used during a special April 17 groundbreaking ceremony. The expansion project is scheduled for completion in 2017. (Kevin J Parks/CR Staff)

“We remember them gratefully because we are standing on their shoulders,” the archbishop said in his homily at the noon Mass, prior to a groundbreaking ceremony at which he pushed the first shovel into the ground and blessed the site of the church’s new sanctuary.
Archbishop Lori also acknowledged Father Michael White, the pastor, noting that Nativity has been rebuilt “not only in its physical structures but indeed in its pastoral life and outreach.”
“This is surely a moment for you and me to express our deep appreciation to Father Michael White, our pastor, and to all his devoted co-workers,” the archbishop added, triggering a solid minute of applause from parishioners.
Concelebrating with the archbishop were Father White and Zambian priests Father Gregory Muliya and Father Isaiah Mwelwa, who are currently serving at Nativity.
As is the norm at the parish, the Mass included music from a six-piece band as well as two massive screens offering a pre-Mass video introduction, worship responses, lyrics and relevant artwork.

“There’s a lot of energy in this church,” said Jeff Rottinghaus.

He added that he and his family “were kind of taken aback,” in a good way, when they were warmly welcomed by multiple people upon their first visit to Nativity.
Sue Mihok, director of operations and building project coordinator, as well as a parishioner for eight years, said that Nativity enhances her faith “in so many ways.”
“I feel like every time I’m in church it’s an opportunity to grow in my faith and grow as a person,” she said.
According to a website dedicated to Nativity’s expansion, nativityvision.tv, the new sanctuary, with the capacity to seat 1,500, will be built adjacent to the current sanctuary, which will remain in place as a chapel and venue for children’s programming.
“This will enable us to seat everybody in one place,” Mihok said, adding that three “video venues” are currently needed to serve parishioners who don’t fit into the current sanctuary.
The $15 million expansion also includes a new narthex and café with patio and outdoor seating, as well as expanded and reconfigured parking.
The parish has more than $12 million in pledges toward the project, according to Bradley.

Members Church of the Nativity in Timonium Building Team break ground on their new sanctuary during a special ceremony April 17. The expansion project, which is scheduled for completion in 2017, is to accommodate the continued growth of the Baltimore County parish. (Kevin J Parks/CR Staff)

“It’s an impressive amount for a suburban Catholic parish,” he acknowledged. “We are a very giving-focused congregation – we see it as part of our discipleship.”
Bradley noted that the expansion is meant to serve more than the upwards of 4,000 who attend Mass at Nativity every weekend. The extra space will make for a more hospitable experience for first-time visitors, he said, and it will help the parish serve as an example for other Catholic parishes that hope to emulate Nativity’s growth and enthusiasm.
“Lots and lots of parishes have called us for help and ideas,” he said, adding that books authored by Father White and Tom Corcoran, pastoral associate of Nativity, were the start of the church’s additional role as a teaching parish.
“It’s about equipping and inspiring other parishes,” he said.
To that end, Nativity launched the Rebuilt Parish Association (rebuiltparishassociation.com) in November 2015, as a source of content and community for like-minded parishes.
“It’s about being a light to other parishes and growing discipleship,” Bradley said.
Father White was unavailable for comment.
As Nativity has dubbed its expansion the “Vision Campaign,” Archbishop Lori encouraged parishioners to contemplate that phrase.
“We are not talking about bifocals or contact lenses, but a vision of faith and life proclaimed here at Nativity with relevance and resonance for daily living,” he said.
Once that vision becomes apparent as the light of Christ, the archbishop added, “We cannot keep this vision to ourselves.”

See the video from the groundbreaking here.