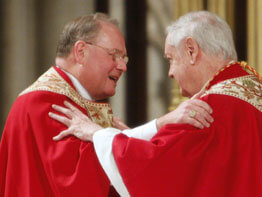 WASHINGTON – Pope Benedict XVI named Archbishop Timothy M. Dolan of Milwaukee as archbishop of New York and accepted the resignation of Cardinal Edward M. Egan, who has headed the archdiocese since 2000.

The appointment was announced Feb. 23 in Washington by Archbishop Pietro Sambi, apostolic nuncio to the United States.

Archbishop Dolan, a St. Louis native who turned 59 Feb. 6, has been head of the Milwaukee Archdiocese since 2002 and was an auxiliary bishop of the St. Louis Archdiocese for a year before that.

Cardinal Egan, who turns 77 April 2, was ordained a priest of the Chicago Archdiocese and served as an auxiliary bishop of the New York Archdiocese, 1985-88, and bishop of Bridgeport, Conn., 1988-2000.

Both Cardinal Egan and Archbishop Dolan have backgrounds that include extensive service in Rome and/or at the Vatican.

Cardinal Egan worked for 14 years as a judge in the Roman Rota, the Vatican court of appeals for canonical cases, especially those related to marriage. He also was on the faculty of the Pontifical North American College, the U.S. seminary in Rome, during that time.

Archbishop Dolan studied for the priesthood in Rome and was rector of North American College from 1994 to 2001. He also worked for five years on the staff of the apostolic nunciature in Washington.