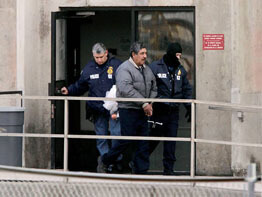 DENVER (CNS) — The archbishop of Denver decried the immigration raids conducted at meatpacking plants in six states Dec. 12 by federal authorities to arrest workers in the country illegally who were suspected of participating in an identity theft scam.

“The mass arrest of unauthorized workers in Colorado and across the country this week once again puts a human face on the flaws in our immigration system, a system that needs immediate and very serious reform,” Archbishop Charles J. Chaput said in a Dec. 13 statement.

The Catholic Church supports the law and respects law enforcement officers, he said. But Catholics must question why the federal action occurred so close to Christmas and on the feast of Our Lady of Guadalupe, a special day in the church, particularly for Hispanics, he said. Many of the affected workers are Hispanic.

The raids were conducted at plants run by Swift & Co., a meat processor based in Greeley, Colo.

Immigration and Customs Enforcement said in a Dec. 13 news release it had arrested 1,282 people at the six plants on “administrative immigration violations.” The arrests, it said, were “part of an ongoing worksite enforcement investigation into immigration violations and a massive identity theft scheme that has victimized U.S. citizens and lawful U.S. residents.”

Of those arrested, 65 also were charged with criminal violations related to identity theft or other violations, such as re-entering the U.S. after being deported. Many of those being held were from Mexico, Honduras, El Salvador, Peru, Laos, Sudan and Ethiopia.

Archbishop Chaput said that as he has stated many times in the past “the church supports the law. She supports our nation’s right to regulate immigration and secure our borders for the common good of all citizens. We also deeply respect the men and women who have the task of enforcing the law in difficult circumstances.”

However, “as Catholics, we also need to vigorously question the timing, manner and focus of these latest arrests,” he said, referring to the fact that the raids occurred on the feast of Our Lady of Guadalupe and “barely two weeks before Christmas.”

“These raids have disrupted hundreds of families in the immigrant community and frightened many thousands more,” Archbishop Chaput said. “And while public officials have explained the reason for these raids as criminal identity theft, most of the real criminals — the people who steal and sell the false identities so that undocumented immigrants can find work — were not among those arrested.”

The agency said the investigation began in February 2006 and has been looking into whether undocumented immigrants have illegally assumed the identities of U.S. citizens and improperly used their Social Security numbers and other identity documents to get jobs at the Swift facilities.

Swift officials said that the raids shut down the plants only temporarily as federal agents interviewed employees — the company has 13,000 workers — and operations resumed the same day, though at “reduced output levels.” They said the company expected “no adverse long-term impact.”

According to an Associated Press story, immigration officials told Swift that raids to remove unauthorized workers would take place Dec. 4. Company officials asked a federal judge to prevent the move, saying it would cause substantial injury to its business. On Dec. 7 the judge denied the request, clearing the way for the raids. Company officials also have noted that they use an existing federal program to check applicants’ identity papers but that the system is flawed.

Archbishop Chaput said that “dramatic, get-tough arrests of more and more average workers will not solve our immigration crisis.”

Such actions, he said, “often engender more confusion and bitterness,” and they do not get at “the root of the real issue: an immigration system that seems disconnected from the human and business realities of the American economy.”

With Christmas approaching, he asked for prayers for the spouses and children of those who were arrested and face deportation.

“We urgently pray that God will grant our law enforcement authorities prudence, justice and restraint in carrying out their duties, and that members of Congress will act rapidly and with courage in fixing an immigration system that has clearly failed,” Archbishop Chaput said.