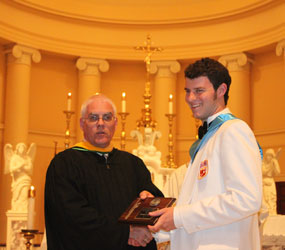 Relaxing on a beach miles away from his northeast Baltimore alma mater, Ben Turcea is enjoying his newfound free time as a high school graduate, getting some much-deserved rest and relaxation.

“I think if u added up the hours of my life over the past four years, I think I spent more hours at Curley than I did at home,” Turcea said of his four years at Archbishop Curley High School in Baltimore. “I did a whole lot at that school, and I wouldn’t have had it any other way, but right now I’m tired – I’m really tired.”

Anyone who was familiar with Turcea’s schedule at Archbishop Curley would likely understand why he may have been in need of a break. Turcea, who received an award for having the highest average in the senior class for four years and the school service award at commencement, was a member of numerous student organizations including the National Honor Society, the Franciscan Youth Ministry, and the student government.

A member of the student government since his sophomore year, Turcea said he enjoyed it the most his senior year due to them getting a centralized location in the school’s new Holthaus Fine Arts Center. That essentially gave them a hub to interact with the student body he said.

“We felt that the new office was a central spot where everyone could meet and plan things instead of everyone just meeting in a classroom,” Turcea said. “I think the student government was felt more amongst the student body this year because people had a place where they could go to and ask questions.”

Turcea felt that being a member of the student government also played an essential role in his maturation process.

“It gave me more of a sense of responsibility,” he said. “I’ve been involved with student government since my sophomore year. Over the years I’ve had more people come to me and ask questions about the school. It made me become more responsible because kids would come to me and relied on me to answer their questions. It gave me accountability.”

The Franciscan Youth Ministry, a faith-oriented organization at the school, was also a big part of his life at Curley, Turcea said. Turcea credited the “holy hour” event the group had every month with helping him gather his thoughts on his personal goals and aspirations, especially during its silent reflection time.

In addition to those activities, Turcea also found the time to get involved with sports at Curley. He was a co-captain of the varsity volleyball team this past year and also participated with the Ultimate Frisbee Society.

Turcea said the school has more than prepared him for his next step and it shows – he scored a perfect score on the SAT Critical Reading section and will be attending the University of Scranton on a full academic scholarship. He credited three teachers in particular that helped keep him stay on track – religion teacher Jamie Long, English teacher John D’Adamo, and Spanish teacher Cheryl Jose.

“Along with my family of course, the three of them always expected nothing short of the best out of me,” he said. “Their expectations were a huge part and contribution to my success.”

Turcea intends to keep those same expectations for himself once he starts school in the fall.

“Curley as a whole set the expectations very, very, high,” he said. “I feel that’s the only way to be really successful. Hopefully in college I’ll be able to stay focused on that and keep those expectations for myself and make myself successful.”