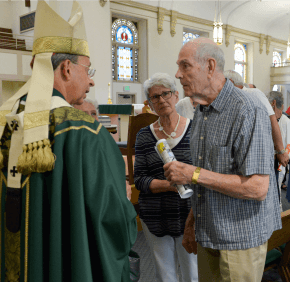 witter @ReviewErik
ELLICOTT CITY – Two weeks after historic flooding killed two and impacted many others, Baltimore Archbishop William E. Lori offered a Mass at the church that served as a refuge during the storm.

“Many of you volunteered to comfort and assist those most affected by the flooding,” the archbishop told parishioners during his homily at the Aug. 13 vigil Mass at St. Paul, located a stone’s throw uphill from the devastation. “So please accept my warmest thanks for your neighborly kindness, which is also a wonderful example of the Gospel hospitality.”

The archbishop asked the congregation to remember in the day’s Mass “those who died and those who still suffer, even as we ask God’s blessings on efforts to rebuild those parts of town that suffered the heaviest damage.”

With everyone preoccupied with water, Archbishop Lori crafted his homily around the fire of the Holy Spirit, which he said “enkindles in our hearts a genuine zeal for the Gospel – a burning desire to share the good news of Jesus with others.”

Many buildings are boarded up in Ellicott City following ravaging floods that washed through Main Street July 30 (Kevin J. Parks/CR Staff)
“This doesn’t mean we become zealots who drive everyone from the dinner table,” he explained. “It means, rather, that by word and example, we bear witness to the power, the freedom and the joy that is ours as followers of Christ.”
The archbishop concluded with a prayer to the Holy Spirit for assistance, “in these difficult days and in difficult days to come…”

Though many of the parishioners were not directly affected by the flooding, they expressed concern for those who were.

His wife, Diane Gagliardi, noted that one of her fellow singers has a son who had been a chef at one of the destroyed restaurants.

“He already has another job,” she said, though she added that another acquaintance owns one of the restaurants.

“He’s not sure what he’s going to do,” she said. “It’s tough.”
Her husband said that he had “every confidence that Ellicott City will be back, stronger than ever,” noting that the historic city had bounced back from serious floods before.
Deacon Knepper said that though many parishioners weren’t directly impacted by the most recent flooding, all have felt the effects in one way or another.
“It’s thrown everybody off their normal routine,” he said, adding that his formerly five-minute commute to St. Paul is now 15-20 minutes because downtown Ellicott City remains closed.

He called the flood “surreal, in a sense.”

“It always happens to somebody else, and now it has happened to us,” he said.

Parishioner Chris Hennigan said that there has been “a real eagerness to help the community.”

“There’s so much devastation down there,” he said. “Our hearts and prayers go out to these people.”
The parish has assisted materially, as well. In addition to serving as a haven for the dozens fleeing the rushing waters July 30, the parish has since collected several thousand dollars to help with relief and rebuilding efforts, according to John Papania, its business manager.
Other regional parishes, including Church of the Resurrection in Ellicott City, St. Alphonsus Rodriguez in Woodstock and Our Lady of the Angels in Catonsville, also held or will hold special collections.
Papania added that the Ellicott City Partnership, the local business association of which he is a board member, had collected approximately $250,000 in donations, many from faith-based organizations, as of Aug. 9.