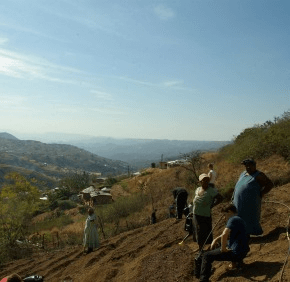 Fourth in a series, “How I Spent My Summer Vacation” By Keith Meisel
Special to the Review
Halfway through their summer vacation mission, 10 students and three chaperones from Mount St. Joseph High School would have found it difficult to send a postcard home.
Halfway around the world, the group spent nearly a week working under a bright, warm, winter sun, on the side of a hill in a valley far from a post office or mailbox – let alone paved roads, electricity and running water.
The contingent from the all-boys high school in Baltimore spent 18 days in South Africa in July, wrapping visits to Johannesburg and Cape Town around six days of service in Durban. They helped villagers farm; served breakfast and lunch to the homeless and unemployed; helped at a boys’ home; and painted at an AIDS center.
“I love helping people, which is part of the reason I chose to go on this trip,” said Alex Whittaker, one of three rising seniors to go. “The other reason was to travel and experience difference places, different cultures.”
The group included three rising juniors and four members of the class of 2016, among them Jackson Polcaro.

“It was awesome, a great trip,” said Polcaro, who’s headed to the University of Denver. “The only problem with it was, we did not get to do enough service work. After two visits to Haiti, the school’s first trip to Africa saw the group arrive in Johannesburg July 12. The next day, they toured its Apartheid Museum, which offers photos, documents and film on the former state policy of racial segregation.
“That was really cool,” said Whittaker, who hopes to attend an Ivy League school next year. “I didn’t know how bad it was (living under apartheid). It’s crazy that it wasn’t that long ago.”
A new constitution that allowed blacks and other racial groups to vote took effect in 1994.
In the Soweto township, 10 students shared five bunk beds in one room.
Later, in Cape Town, a scheduled boat trip to Robben Island, where Nelson Mandela had spent 18 of his 27 years in prison, was canceled due to heavy rain and choppy water, disappointing Whittaker.
A leader in the campaign to overthrow apartheid, Mandela was released from prison in 1990 and elected president of South Africa in 1994, when a new constitution allowed blacks and other racial groups to vote. Mandela and former South Africa President F.W. de Klerk shared the 1993 Nobel Peace Prize for what the Nobel website said was “their peaceful termination of the apartheid regime.”
The group was able to hike 2,196 feet to Lion’s Head, part of the Table Mountain National Park, to enjoy what Whittaker described as the “incredible views” of where the Atlantic and Indian oceans meet.
The Mount St. Joseph group also drove several hours up the coast from Cape Town to spend two nights on a game reserve, where they saw lions, zebras, giraffes and elephants.
Most meals were local food, often “braai,” the Afrikaans word for grilled or barbecued meat. According to the New York Times, it is the only word recognized by all 11 of the country’s official languages.
“They grill a ton of different meats to serve with rice or mieliepap, which is kind of like cold porridge, really thick,” Whittaker said. “It’s really popular.”
The group also enjoyed “bunny chow,” hollowed out bread filled with a curry concoction of meat and rice. Polcaro said it very popular in Durban, which has the largest Indian population outside of India.
They helped serve breakfast and lunch to the homeless and unemployed at the Denis Hurley Centre, an outreach similar to Baltimore’s Our Daily Bread. It is named for Durban’s archbishop of 45 years, who was known as a proponent of justice and peace.
It is next to Emmanuel Cathedral, where the group attended Mass.
“There are three Masses celebrated in English, English and Zulu and a third in Zulu,” Whittaker said. The experience was accentuated by the acoustics in the cathedral, built in 1903.
Other highlights included helping at St. Theresa’s Children’s Home, which has cared for orphaned and vulnerable children for 86 years, where the nearly all-white group from Mt. St. Joseph presented an unusual sight.
“The big thing was,” Whittaker said, “they knew we were from America and they wanted to talk about America.”
Brett Davis, a chaperone, related that Jack Mansfield, who played soccer for the Gaels, told him several of the home’s students were talented enough to play for the Mount St. Joseph varsity.
There was also plenty of work.
Toiling alongside grandmothers in the Valley of 1,000 Hills, and using the most basic forms for communication to overcome the language barrier, the group cleared the land in the picturesque valley outside Durban and planted cabbage, cauliflower, spinach and lettuce.
“The kids did such a great job. They got out there and worked,” said Davis, a history teacher. “We weren’t gardening. We were farming. And the Zulu grandmothers, 60-70 (years old), they were out there working their tails off.”
Davis chaperoned along with fellow teachers Kevin Abdo, the driving force behind the trip, who has since moved onto a fellow Xaverian high school in Boston, and Sarah Slingluff.
Davis estimated that the trip cost more than $4,000 per person, an expense alleviated by fundraisers. One student’s mother donated several designer purses for a raffle; Whittaker said his parish, St. Joseph in Odenton, made a donation.
“I really think this trip should be continued in the future,” Polcaro said. “It’s a fantastic thing.”
Both students said they bought beaded bags and jewelry at the Hillcrest AIDS Center gift shop for family members back home – much better souvenirs than a postcard.
See also:
Abingdon ‘Shadow Players’ share theatrical gifts with parish
Summer fun for adults with special needs
PrevNext