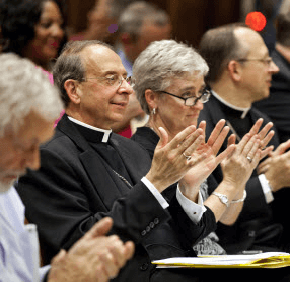 More than 200 people attended the invitation-only event, which included representatives from Christian, Muslim and Mormon communities, as well as written support from the Orthodox Jewish community, who were observing Yom Kippur.

Church leaders urged those in attendance to take their “feet to the street” and “get souls to the polls” to vote “no” on Question 6, the Maryland ballot referendum that seeks to legalize same-sex marriage.

As chairman of the Maryland Catholic Conference (MCC), Archbishop Lori hosted the event, which was sponsored by the Maryland Marriage Alliance (MMA). The MCC, which advocates for public policy on behalf of the state’s Catholic bishops, is an MMA coalition partner.

Archbishop Lori noted that the Bible opens and closes with images of marriage – Adam and Eve in Genesis and the Book of Revelation’s wedding feast of the lamb.

“The union of man and woman is not only a good for the couple, but for the entire community of believers and for humanity, because marriage serves as a model and as a reference point for all that God calls humanity to be,” Archbishop Lori said.

The Catholic Church and other faith traditions value marriage as a unique relationship reserved for one man and one woman because it can create children and it raises them in relationship with their biological mothers and fathers, Archbishop Lori said.

Political strategist Frank Schubert, who managed successful campaigns against same-sex marriage laws in California, Maine and North Carolina and is working with the MMA, also rallied the crowd. He urged traditional marriage supporters to contribute financially to the effort’s media campaign.

“The campaign in Maryland is just hitting its stride,” Schubert said.

McCoy expects the campaign to launch television and radio ads around Oct. 8, he told the Catholic Review.